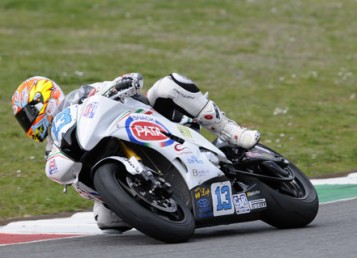 At Imola with top target. This is the objective of the nine Italian riders enrolled in the second round of the World 600 for production-based series. On the occasion of the opening stage of our Phillip Island had goodthings to see (Baldolini and Iannuzzo in the top ten, Tamburini and Roccoli good but unlucky) but on the home circuit will try to perform even more prestigious.
The Romagna rider Roccoli, former Italian champion, seems to be in great shape with Team Yamaha Bike Service – WTR TEN 10 as well as fellow countryman Roberto Tamburini, who will try to return to the top with Team Lorini Honda as well as her mate team, the Umbrian rider Andrea Antonelli. A competition for the first five even link to it much sooner, the two bearers of the Triumph team led by roman Ninetto Suriano, Alex Baldolini and Vittorio Iannuzzo  (Italian Ranked first in Australia) while among the riders attention to the CIV Italian Superstock 600 champion, Dino Lombardi, eager for success after the ill-fated test at Phillip Island.
For notes “blue”, should also note the presence of Menghi Fabio and LucaMarconi (Yamaha – Racing VFT) and the wild-card Cristiano Erbacci, riding the second R6 Bike Service – WTR TEN 10.