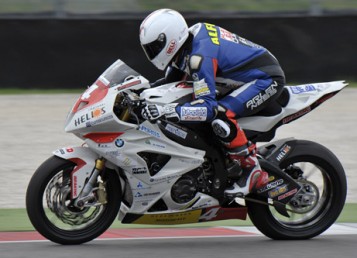 It ‘s time to get serious for riders engaged in the Italian Superbike. The great performances from individual deals in Phillip Island is a nice calling card for the first European (and Italian) taking place this weekend at Imola.

If Max Biaggi and Marco Melandri riding Aprilia and BMW will certainly be on the game for apodium place while Michel Fabrizio and Badovini on the Italian branch of theS1000RR are ready to redeem them with a benefit equal to their rivals, great expectations there is also the young blue patrol formed by Davide Giugliano, Niccolò Canepa and Lorenzo Zanetti. The three in Australia have shown a complete lack of awe and the more experienced riders to race for the top ten of each round. It ‘clear that in Imola, one of the circuits of the house and the entire audience on their side, fans will expect something more from the three already Superbike talents, which, however, made ??their debut at the above expectations.

We’ll see what happens right from qualifying this afternoon. Note, by the way of the CIV, the presence of Lorenzo Alfonsi: the Tuscan is entered on the permanent list in 1000 with the BMW Stock 1000 by Play Racing Team, but in world competition run by the Pro Ride Honda bearer Real Game.