The Mugello RACE PROGRAM is on line 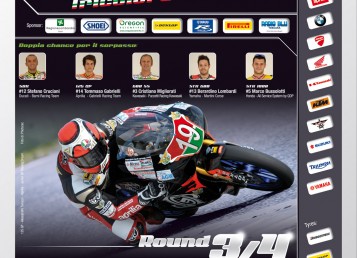 The Mugello ROUND 3 and ROUND 4 RACE PROGRAM is online. Apart from the complete weekend program, it also includes the Italian memories of Luca Scassa and the interviews of Tuscan riders, the CIV appointments on tv and all the collateral events to be hosted in the paddock for the double appointment with the Campionato Italiano Velocità.

Here is the tv and media coverage of the round:

Sportitalia 2 (channel 226 Sky, Digital Terrestrial Television and live streaming) will live broadcast the Superbike, 125 Gp and 600 races of the Round 4 at 1.50pm. During the week it will transmit the delayed races of the Stock 1000 and Stock 600.

Nuvolari (channel 218 Sky and Digital Terrestrial Television) will always live broadcast the Stock 600 and Stock 1000 races at around 4.10pm. On Tuesday and Wednesday, at 5pm and 00am, it will broadcast the delayed races of the other categories.

Moto TV (channel 237 Sky) will be again at the CIV side to put on air all the Mugello Round 4 races on Tuesday, starting from 7pm.

Civ.tv The website has been completely renewed in its graphic layout and the contents, so that www.civ.tv is the real Road Racing portal. News, exclusive interviews, photos, videos and much more to describe the CIV and all the other 2010 events.

Radio Blu Toscana is the official radio of the Mugello Round. The radio station will be at the CIV side through promotions issued every day before the race day and will suggest a nice challenge to its listeners, it will also offer free tickets for Sunday’s race as a prize and a track lap on the two-seater Yamaha.

Newsletter, Feed & mobile. On the official web site, it is possible subscribing to the Newsletter (http://www.civ.tv/newsletter.asp) to be up to date about the whole 2010 Road Racing activity. Furthermore, through Feed Rss (http://feeds.feedburner.com/civ) it is possible automatically receiving, every 24 hours, the website news at the mail box or displaying them on a series of scanners. Finally, starting from today, all the Civ.tv news will be available even on mobiles, at www.civ.tv/mobile.

THE FOLLOWING ARE ALL THE COLLATERAL APPOINTMENTS AND THE INFORMATION:

Great Saturday. On Saturday during lunch break, between the end of the official free practices and the races of the Round 3 to be disputed in the afternoon, lot of gadgets will be distributed to the audience and the Pole Positions prize giving will take place. The results will determine Saturday and Sunday’s grid.

Goal. In the Mugello paddock as well the poles of the professional table football players, from the International Champion Cup, will be the protagonists; this event will be joined by the Campionato Italiano Amatori which gathered a crowd of participants at the Roman weekend. There will be valuable prizes and a lot of fun. Information and program at www.ficb.it .

Prize. Due Ruote/Motonline will award the prize to the rider clocking the fastest lap in the Stock 600 race. Furthermore in the paddock there will be their personalized stand, where the magazine copies of Due Ruote and X Off Road are going to be distributed.

BMW Safety Car. It will be the German corporation the supplier of the official CIV safety car. The debut will take place during the Mugello weekend and then it will be there at all the other Championship rounds.

New entry. There will be two new exhibitors in the paddock, Bardhal and Shoei.

Together. The partnership between the FMI and Infront Sport&Media has been reconfirmed. FMI card holders will obtain a 10% reduction on the tickets of the 3 Italian WSBK rounds. The thousands World Championship spectators will get reduced tickets for the CIV races.

CIV for Africa. At Mugello there will also be “Africa 16mila” (www.africasedicimila.it), the project organized by COOPI – International Cooperation and by MotoForPeace. A stall of the Ong based in Milan will report the travelling experience lived by some members of the police force, along the countries of Eastern Africa in order to promote the dialog and the peace among nations. The proceeds will be donated to the project embarked by the ONG in Ethiopia in 2007, to improve women and children’s life conditions in a village named Woreda. It is only needed to enter in the website, read the diary of the motorcyclists and “buy” part of the kilometers they are covering.

Charity. It will be the Cystic Fibrosis Research Foundation, again, the 2010 CIV charity partner. The proceeds of the official t-shirt sales will be donated to the FFC.