THE MONZA RACE PROGRAM: all the appointments 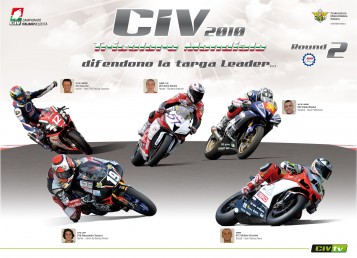 The Monza Round 2 race program is on line. Apart from the complete weekend program, it also includes the Italian memories of Giacomo Agostini and Fabrizio Pirovano, the CIV tv program and all the collateral events to be hosted in the paddock (and not only) for the second appointment with the Campionato Italiano Velocità.

Here is the tv and media coverage of the round:

Nuvolari (channel 218 Sky and Digital Terrestrial Television) will always live broadcast the Stock 600 and Stock 1000 races at around 4.45pm. On Tuesday and Wednesday, from 5pm and 00am, it will broadcast the delayed races of the other categories. Commentary by Fiammetta La Guidara.

Moto TV (channel 237 Sky) will be again at the CIV side to put on air all the Monza races on Tuesday, starting from 7pm.

Civ.tv News, exclusive interviews, photos, highlights, videos and much more to describe the CIV and all the other 2010 events.

Radio Reporter is the official radio of the Monza Round. The radio station will be at the CIV side through promotions issued every day before the race day and will suggest a nice challenge to its listeners, it will also offer free tickets for Sunday’s race as a prize and a track lap on the two-seater Yamaha.

THE FOLLOWING ARE ALL THE COLLATERAL APPOINTMENTS TO BE HOSTED IN THE PADDOCK (but not only):

Ticket. Free entrance on Friday and Saturday; Sunday ticket will cost € 20 including the paddock access. Reduced ticket to € 15 for FMI card holders, people under 18 and women; free entrance for children under 14.

Great Saturday. These are all the Saturday’s appointments: the riders’ autograph session at 6pm (among them there will be the Championship leaders), free gadgets distribution to the audience and the Pole Positions prize giving. At Monza, the five fastest riders will receive the new digital camera ATC5K by Oregon Scientific.

Goal. After Vallelunga, in the Monza paddock as well (and lately at Mugello and Imola) the poles of the professional table football players from the International Champion Cup will be the protagonists; the Campionato Italiano Amatori will still be disputed after its huge success at the Roman weekend. There will be valuable prizes and a lot of fun. Information and program at www.ficb.it .

Flight. The Yamaha Team Lacroce dealer, in partnership with Play Racing Team, will place the helicopter transport service to the organizers and teams disposal from/to the circuit (from Thursday till Sunday). It will be possible to overfly the track and to make photos or shootings. Infoline: 340.1574106 Daniele  347.6516020 Matteo Lacroce.

Transformation. The Assobike challenge, a contest for all  motorbike enthusiasts, will take place at Monza: the winners, who will enjoy the weekend with one of the best CIV teams, will have to modify a stock bike and turn it into a race bike. On Saturday, a tester of a national newspaper will analyze the bike and the civ.tv cameras will shoot the performance.

Life. “Una vite per l’arte” – “A screw for art” is the project which comes from an idea of Letizia Gavioli, in partnership with the FMI. At Monza (and during all rounds), the audience will be invited to bring a mechanic component in the stand built in the paddock (a screw, a bolt, or an element of the engine), which will be drawn and lately used in order to create a pictorial work. The creation will be exposed during the final CIV round at Mugello. At the end of the season, it will be put up for auction in e-bay and the proceeds will be donated to the Habitat Association, which helps autistic people.

Let’s introduce us. There will be so many events, hosted in the paddock and in the press room as well: on Saturday at 3.30pm ,Grillini Racing will reveal the GAPAM 201 GP machinery, the MOTO 2 made by the Team from Bologna. On Sunday morning, from 11am, it will be the time of the All Service System Team by QDP to introduce its riders and the team itself which will be involved in the 2010 season.

Prize. Due Ruote/Motonline will award the prize to the rider clocking the fastest lap in the Stock 600 race. Furthermore in the paddock there will be their personalized stand, where Due Ruote and X Off Road magazine copies are going to be distributed.

Diablo. On Sunday at 12pm Pirelli will present the latest novelty about Hypersport tyres in its hospitality. They will describe the features of the tyre and its personalization. The presentation will be followed by an interesting quiz through wich people could win nice Pirelli gadgets.

Together. The partnership between the FMI and Infront Sport&Media has been reconfirmed. FMI card holders will obtain a 10% reduction on the tickets of the 3 Italian WSBK rounds. The thousands World Championship spectators will get reduced tickets for the CIV races.

Charity. It will be the Cystic Fibrosis Research Foundation, again, the 2010 CIV charity partner. The proceeds of the official t-shirt sales will be donated to the FFC.