The Italian Championship has World features 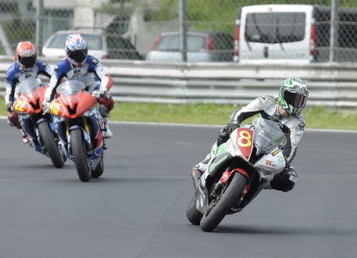 The second round of the 2010 Campionato Italiano Velocità will be disputed the coming weekend, on the Monza circuit. After the opening challenge of Vallelunga on April 18th, the 150 riders of the Italian Championship will challenge in the 125 Gp, Superbike, Supersport, Stock 600 e Stock 1000. In one week time, Monza will also host the World Suberbike Italian round, so that many riders involved in the World series will take part in the CIV to prepare the bike in the best way looking forward next weekend.

THE WORLD SERIES WILD CARDS – There are almost 13 guest riders attending the Monza CIV round. Among them there are French Fabien Foret, Supersport World Champion in 2002 and member of the Lorenzini by Leoni Team. “The CIV is an amazing Championship and the riders’ level is very high – stated the 37 year old Kawasaki French man – the aim for this weekend is preparing the bike in the best way ever looking forward next Sunday’s race”. Even the whole BMW Motorrad Italia Team will ride the Italian race (but in the Stock 1000). The team, accredited in the FIM World Cup in the Superstock 1000 category, will be represented by young Daniele Beretta and Ayrton Badovini. “Here at Monza, we have the chance to do a great job – said the 23 year old Badovini, leader of the World Cup through three victories grasped over three disputed races – it’s a pleasure being back at the CIV. At Monza I always rode strong races”. Also 22 year old Magnoni (Honda) will line up at the Superstock 1000 start, joined by World series fellows Badovini and Beretta.

THE CIV RACES – On Sunday there will be five categories challenging: in the Superbike Stefano Cruciani (Ducati – Barni Racing Team) will be the favorite rider courtesy of the Vallelunga race victory, whilst in the 125 Gp the lead rider is Alessandro Tonucci (Aprilia – JuniorGp Racing Dream), winner of the first round. Roman Ilario Dionisi (Honda – Improve Racing Team) will try to get a second victory after the success on his home track. Fabio Massei (Yamaha – Team Piellemoto) and Ivan Goi (Aprilia – Team TRD Racing Cavazzin) are ruling respectively the Stock 600  and Stock 1000 .

THE POLE POSITION PRIZE GIVINGS – Among tomorrow’s appointments there is the riders’ autograph session, at around 6pm (among them there will be the Championship leaders), free gadgets distribution to the audience and the Pole Positions prize giving. At Monza, the five fastest riders will receive the new digital camera ATC5K by Oregon Scientific.

TEAM GRILLINI PRESENTATION – Tomorrow, at 3.30pm in the press room, the Grillini Racing will reveal the GAPAM 201 GP machinery, the MOTO 2 made by the Team from Bologna.

A SCREW FOR ART – It is the project which comes from an idea of Letizia Gavioli, in partnership with the FMI. The audience will be invited to bring a mechanic component in the stand built in the paddock (a screw, a bolt, or an element of the engine), which will be drawn and lately used in order to create a pictorial work to be put up for auction in e-bay. The proceeds will be donated to the Habitat Association, which helps autistic people. One of the works made this weekend there is the Yamaha R1 fairing of the Assobike contest winners.

THE WEB SITE – Through the official CIV web site, www.civ.tv, it will be possible following the live timing of the practices and races of the Italian Championship. Furthermore news, races commentaries and the interviews to the protagonists will be also available.

TIMETABLES, TIKETS AND PRICES – Tomorrow, the free qualifying sessions will get underway at 9am to finish at 6.30pm. Sunday’s race program will begin at 10.55am, when the first Yamaha R Series race will kick off. The CIV challenges will start at 2pm with the Superbike, followed by the 125 Gp, Supersport, Stock 600  and the Stock 1000 at 5.50pm. Free paddock entrance in the CIV paddock on Saturday, whilst Sunday’s ticket will cost € 20 (€ 15 for FMI card holders, people under 18 and women; free entrance for children under 14).