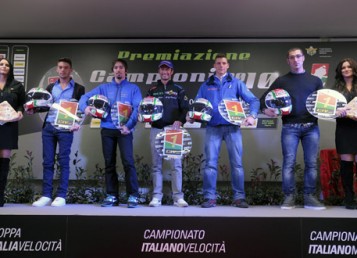 The Mugello circuit hosted the final and crucial round of the 2010 Campionato Italiano Velocità. Alessandro Polita was crowned Superbike Italian Champion at Misano with few rounds to go, whilst the other crowns were delivered at the Mugello track and went respectively to Roberto Tamburini (Supersport), Fabio Massei (Stock 600), Ivan Goi (Stock 1000) and Francesco Mauriello (125 GP).

TAMBURINI RULED THE SUPERSPORT – Gianluca Vizziello Honda CBR 600 RR was disqualified after the technical controls done at the end of the race, despite the rider took the chequered flag in second and was even decreed Italian Champion. So that the Italian Title went to Roberto Tamburini (Yamaha – Bike Service R.T.), who finished the race in third position and led the standings, followed by Ilario Dionisi and Ferruccio Lamborghini. The race winner was Dionisi (Honda – Scuderia Improve). “I didn’t do a great start, anyway I knew my pace was competitive – stated the winner – as Vizziello made a mistake, by having a contact with Tamburini bike, I overcame him pushing as hard as I could and I was able to keep rivals behind me”.

MASSEI TRIUMPHED IN THE STOCK 600 – Ten riders battled it out for the Stock 600 podium of the last round, putting on stage a thrilling show and the challenger who finally led the pack was Dino Lombardi (Yamaha – Martini Corse). Fabio Massei classified in eighth position: the Piellemoto Yamaha Team rider managed the tough situation in a great way showing great maturity and gaining essential points for the Title. “I was a spectator of the race because the situation was too complicated and I didn’t want to take any risk even because I knew I could have felt quiet even with the tenth place”.

GOI IS THE LEADER OF THE STOCK 1000 – Lorenzo Alfonsi was the fastest rider in the Stock 1000 at his home circuit and took the chequered flag before the other challengers, on board the Kuja Racing BMW machinery. The Tuscan rider was joined on the podium by Ivan Goi and Luca Verdini. Ivan Goi was second overall on board the Aprilia of the Ecodem Racing Team and thanks to the 20 points collected at Mugello, he came home with the Italian Title of his category. Ivan ended the season with an amazing result. “It was a hard race but I did my best – said the defending Champion – I want to thank all the people who stayed at my side. The Title? I want to dedicate it to my Team, my family, my girlfriend and to all those people who believed in me”.

MAURIELLO STARRED IN THE 125GP – Alessandro Tonucci (Aprilia – JuniorGp Racing Dream)  won the Mugello race through a wonderful performance. Second classified was Niccolò Antonelli (Aprilia – Gabrielli R.T.), a revelation of the 2010 season, while the third spot went to Luigi Morciano. The battle for the 2010 Title took place in the back. The twist came at the sixth lap when standings leader, Miroslav Popov (Aprilia – Ellegi Team), fell and gave Francesco Mauriello the green light. The Czech rider was ninth meanwhile Mauriello became the 2010 Italian Champion. “My start wasn’t good but when they told me Popov was no more battling it out for the victory I managed my advantage till the chequered flag – said the new Champion – I want to thank the Matteoni Team for giving me a highly competitive machinery in each race”.

POLITA CONQUERED THE SUPERBIKE – He said it at the beginning of the weekend “I want to win and end this amazing season in a fantastic way”. So that is what he did at Mugello. The member of the Barni Racing Team (Ducati) rode a solitary race as poleman Federico Sandi (Aprilia – Gabrielli R.T.) crashed out, so Polita took the chequered flag with a six point advantage over his closest rival Stefano Cruciani. Danilo Petrucci rounded off the top three. “My start was great and I immediately put pressure on Sandi, who fell unfortunately – said Polita – when I was riding alone I was just thinking about pulling away and managing my advantage till the chequered flag”.