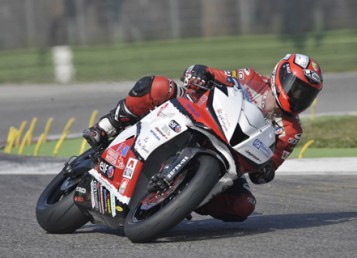 The first of the three champions of CIV determined to stay in the tricolor to defend the title is Ilario Dionisi, winner of the Supersport in 2011. The rider from Lazio region still driving the Honda by Racing Team Improve. To try to wrest the number one virtual (Ilario will still use her 57) from the hull will be a large group of rivals will be headed by Stefano Cruciani (Kawasaki – Puccetti Racing) and also formed from team mate Mirko Giansanti Umbria, from the Sicilian Alessio Palumbo (Honda – Velmotor) and Mattia Tarozzi from Faenza, who, after having fought for the title Moto2 has decided to go with the CBR in Supersport license plate Velmotor (team with the most riders in the Supersport, four). To be taken into great consideration the young Dino Lombardi: fresh winner of the Stock 600, the bell made ??the leap this year in World Supersport and also will be taking the flag in the Yamaha Team Pata by Martini with a single goal: victory.