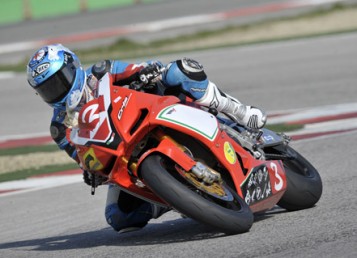 Gone for the MotoGP the 2011 the title winner Danilo Petrucci, contending the table flag of this season will be some of the leading names in Italian motorcycling for the last ten years. The group will dep

art from the front row “virtual”, consists of five talents absolute: it is the former Italian champion Ivan Goi, which this year will go on the Ducati Ba

ld Stock 1000 Lorenzo Alfonsi (PlayRacing), its historic rival Gianluca Vizziello but also one of the protagonists of the last world Supersport, Alessio Corradi (New M2 Racing) and Alessio Velini,that after gaining good results in the 600 tricolor has decided to return to drivingStock 1000 BMW Team 2R Antonellini by Bargy Design. These riders, most likely, you will play the title 2012, but attention to surprises. Could come from the Marches Simone Saltarelli (Ducati – Team Barni) and former Superbike Champion, Norino Brignola, both moved to the premier class of stock derived series. Be followed with interest, then, the return of another former champion Stock, Roberto Lacalendola (Ducati) and the debut of a young man, Federico Dittadi (Aprilia-AS Team Riviera) from Stock 600. There will also Diego Tocca,riding a Kawasaki