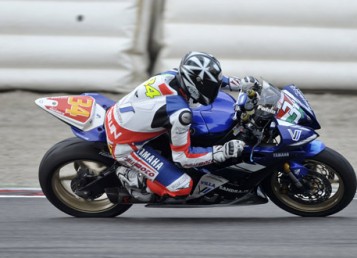 Fabio Massei had no rivals at Mugello neither. The young Roman of the Pielle-Villasandra Team conquered his third consecutive success on Tuscan soil, proving his strength again.

Fabio pulled away from the pole position and set a series of fast laps, which allowed him to reach the finish line with a three second advantage over second classified. “Since Thursday we had been testing with dry and wet conditions, getting great results – said Fabio – riding on dry track is always dangerous but I don’t have any problem. For sure we hope it’s going to be sunny. We all are at the same level and in each race there is a new rider. However I don’t wanna do a list of the strongest riders, I’m here to win”.

Lorenzo Zanetti took a good second place. The TNT Racing team rider, challenging with a Yamaha, recovered from the unlucky performance of Monza (he crashed with few laps to go) defeating Giuliano Gregorini at the fotofinish. “I focused on grasping that result because at Monza I throw away a race I could have won – stated Lorenzo – we did a great work during the sessions so that I closed the gap diving me from  Massei. On Sunday I’ll seek the victory”.

Giuliano Gregorini (Yamaha – Team Elle2 Ciatti), slightly missed the second place but clinched a result which made him move to the fourth position in the Championship so he can aim at the overall podium. “The race was good, I did a solid start despite I lost few positions, then I recovered. Fabio immediately chased away and I faced an amazing bagarre with Zanetti. I don’t mind if track conditions will be wet or dry, I’ll give my best indeed”.

Championship leader Andrea Boscoscuro was forced to leave the race due to a technical problem, whilst he was struggling for the top five. The same thing happened to Lorenzetti and Farinelli, who were capable to stay among the front riders until the final lap when they abandoned the race due to two collisions.

In the Championship Massei strengthened his leadership and now has 75 points. Lomabardi is second with 45 points followed by Zanetti (40 points), Gregorini and Marcheluzzo.