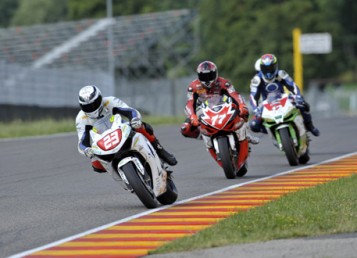 Verdini, Goi, Muzio and Bussolotti were the four great protagonists of the Stock 1000 race disputed on Saturday at Mugello. The four fellows immediately pulled away and battled it out for the victory till the chequered flag. At the end Luca Verdini starred as he used the final lap in the best way maintaining those few meters of advantage over furious Ivan Goi. Verdini, the Honda rider of the Emmebi Team took his first seasonal victory with an eight cent of a second advantage.

“The feeling was good, I was pushing hard and I clinched a great result – said the Mugello race winner – during the first laps I was trying to chase away, but Ivan was always behind me. Fortunately, at mid race, I was able to get a second of advantage which was useful to grasp the victory. What about the Championship? It’s a tough deal, Ivan is a great rival, but I’ll try to make it till the last race”.

Ivan Goi (Aprilia – Ecodem Racing) tryed to conquer the second seasonal success till the the final lap, but he had to surrene to the “perfect day” lived by Verdini. Anyway, Goi conquered 20 points, which will allow him to keep the leadership in the standings. “The bike was working well, I hadn’t big problems and I was able to get points useful for the standings position. The battle for the Championship? I have to watch out from Verdini, Muzio and Bussolotti”.

Marco Muzio conquered his first CIV podium. The representant of the Improve Team, challenging with a Honda bike, ended a very positive day, during which he also started from pole position. “We enjoyed our race – said Marco – I did a great race even if almost at the end I had few problems with the tyres and I wasn’t able to make the difference. Well, talking about the Championship, I wish to get good results at next races and fight for the first positions. Let’s hope it’s going to be sunny on Sunday”.

One of the protagonists of the 2009 season, Riccardo Della Ceca (Yamaha – Rosso e Nero Team) ended in fifth conquering the first points of the current season. A protagonist of the Vallelunga race, Danilo Dell’Omo, did not star at Monza and at Mugello neither. The latter challenges on board the Suzuki of the Suriano Racing Team. Salvatore, Colucci, Baiocco and Conti rounded off the top ten.

In the Championship standings Goi is the leader with 65 points, followed by Verdini (41 points), Bussolotti (37 points), Dell’Omo (34 points) and Muzio (30 points).