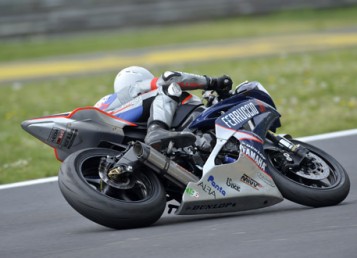 Five riders battled it out for the victory of the third round of the Supersport season. The rider who prevailed among Dionisi, Vizziello, Migliorati, Tamburini and Lamborghini was the latter courtesy of a masterly race. In fact, the winner was able to defeat some big names of the class and he was even the author of an excellent recovery.

Ferruccio (Yamaha – Media Action by Prorace) did not pull away at the start and a contact with another rider caused him a loss of trust in the bike at the first laps. “Since the practice sessions we knew the weather was going to be unpredictable but both set ups for wet and dry track conditions were defined – stated the winner – I did a wrong start and I also had a contact with a rider. When I saw the others chasing away I pushed hard and, thinking about my pace, I got I could have made it. At the end we did it”.

Ilario Dionisi ended in second after heading the race for many laps and came home with 20 points significant for the title. “The bike was working well and also the tyres – said Dionisi – I was hoping in a race with dry asphalt conditions because I have few problems riding with wet conditions. When Lamborghini overcame me I wasn’t able to keep his pace but I hope to improve on Sunday.”

The third podium step went to young Roberto Tamburini, who grasped his second podium after the Vallelunga race, on board the R6 bike of the Bike Service Racing Team.  “I did a good race, after a solid start I tried to stay in the front, but I got our situation wasn’t great so that I had to be pleased with it. I want to thank my Team, we’ll try to improve Sunday”.

Among the top riders there were also two great protagonists: Gianluca Vizziello (Honda – Velmotor 2000) and Cristiano Migliorati (Puccetti Racing Kawasaki), respectively fourth and fifth at the finish line. Top ten was rounded off by Giansanti, Gramigni, Erbacci, Barone and Lai. Alessio Velini crashed at the second lap whilst Ciavattini and Clementi faced a ride through.

In the Championship standings Lamborghini is the leader with 54 points, followed by Dionisi (49 points), Vizziello (47 points), Tamburini (43 points) and Migliorati (42 points).