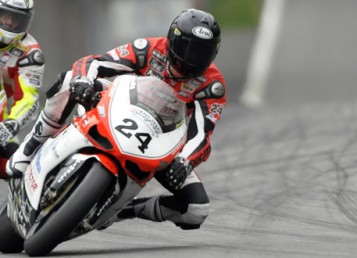 Three riders of the same team mounting on the Superbike podium is an historical result. Today, the Barni Racing Team made history being the absolute protagonist (and lucky as well) of the 2010 CIV third round. The team, headed by Marco Barnabò, reached three good results under the rain at Mugello. This was possible thanks to Luca Conforti, Stefano Cruciani and Alessandro Polita’s performances.

Amazing Luca Conforti took the victory, with an eight tenth of a second advantage over second classified. The winner did a great job by standing during a delicate moment of the race and pushed hard when the time of making the difference came. “It’s unbelievable because I always had bad performances riding on the wet track but this morning, when I got to the track, I immediately clinched good timings and my aim changed – stated Conforti – at the start somebody overcame me, but when I found the right rhythm I worked my way up and at the end I managed the advantage till the chequered flag”.

Stefano Cruciani was second classified and thanks to the points grasped today he reached Polita at the top of the point standings, even if this podium did not fully satisfy him. “I want to congratulate Luca on the victory – said Cruciani – tomorrow I’ll be looking forward a further improvement but I know it will be tough, because I’ll be starting from the back again due to a technical problem and recovering won’t be easy”.

Alessandro Polita was satisfied with the third place. The rider lost the Championship leadership but he does not have to be worried about it. “The race was good – stated Polita – I did a great start but at mid race I relaxed a little bit, whilst Stefano and Luca were working their ways up. At the end I tried to catch them, but I didn’t make it. It’s okay like that, there’s s race to be disputed tomorrow and the Championship is still long”.

Behind the trio, Petrucci and Brignola rounded off the top five, whilst Baggi, Zenatello, Borciani, Aldrovandi and French man Marchand respectively classified among the first ten.

A malediction or maybe too much desire of overdoing things, punished two riders who had been battling it out for the victory until few hours before the end. Poleman Federico Sandi (Aprilia – Gabrielli Racing Team) crashed at the San Donato corner at the fourth lap, right when he was heading the pack with a gap of more than five seconds over chasers. The poleman had a run of ill luck as he experienced three crashes in three races disputed till now.

Flavio Gentile as well was forced to leave the race. The rider was seeking a solitary victory after the Aprilia rider’s collision, but he crashed as well and had to abandon his aim. After Gentile’s off color performances at the beginning of the championship, Saturday he was the supreme rider.

At the top of the Championship standings there are the two Barni Racing Team fellows, Cruciani and Polita (61 points) followed by Petrucci (43 points), Conforti (36 points) and Borciani (34 points).