Saltarelli: “I will make my best on Ducati Barni” 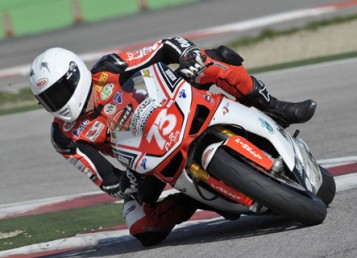 He left the Superbike and Ducati by Team Grand Corse, with which he took good satisfaction in 2011 to climb another 1198, the one prepared by Barni Racing Team an dtry to run starring in another category, the 1000 Stock. The position, Simone Saltarelli,is not the most comfortable because on that same bike Danilo Petrucci has dominated the last season then jumping to the MotoGP with the CRT but the rider from Marche seems to love the challenges more difficult and during testing at Imola has seemed concentrated, load and to the right place. “Fortunately I’m using the 1198 that beyond the technical differences between STK and SBK is very similar to the one I used last year – said Simone – I still have to fit in well in braking, suspension and tyres to the above: I come from Michelin but this year I will run with Pirelli and then we have to do a little “hand” but I’m very confident. “
The great amount of confidence comes from the fact that they can count on the team champion and a bike that has a few secrets for both the rider and the technicians at the box. “The boys are all very professional and the bike is certainly valid since it was brought to the top of Danilo. In the early rounds of the Mugello we will also work on the correct driving position and the target for this weekend will confirm at the top in this category … I do not want speak more”.