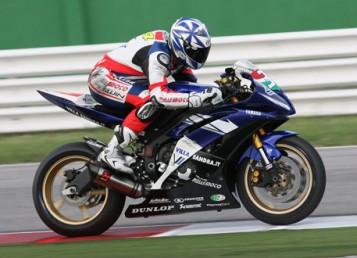 The rain fallen during the first and the second session affected today’s practices hosted at the “Misano World Circuit”, where the CIV seasonal sixth round got underway.

THE QUALIFYING – In the 125Gp today’s best time went to the 17-year-old Alessandro Tonucci (Aprilia – Junior GP Racing Dream), who reached the pole position through the time of 1’46”083 and overcame Championship leader Miroslav Popov, home rider Niccolò Antonelli and Armando Pontone who rounded off the front row. “I’m pretty happy with my practices, because now after a tough time I can ride as I prefer – said Tonucci – my set up is great on dry track, whilst we still have to work on the one to use in wet conditions. Let’s hope tomorrow won’t rain”. Even Alessandro Giorgi seventh place and Mattia Tarozzi eighth position are worthy to be underlined.

The Supersport was featured by a surprising rider from Lazio region: the pole was clinched by Ilario Dionisi (Honda – Scuderia Improve), who set the time of 1’39”447. Behind Dionisi there were respectively Mirko Giansanti, Roberto Tamburini and Alessio Velini. Standings leader, Ferruccio Lamborghini, was just eighth   with more than a second gap dividing him from poleman.

In the Superbike the author of the fastest time was Alessandro Polita: the Barni Racing Team fellow put his name on the amazing time of 1’36”724 reached on board his Ducati machinery, finishing in front of Federico Sandi, Danilo Petrucci and Luca Conforti.

Fabio Massei took the leadership in the Stock 600 and tomorrow he will try to conquer the Italian title with one round to go, on board his Yamaha of the Piellemoto Team. His time of 1’41”981 reflected his great performance which was better than those belonging to Tommaso Lorenzetti, Berardino Lombardi and Lorenzo Zanetti.

The pole position of the Stock 1000 was conquered by Domenico Colucci (Ducati – Barni Racing Team) courtesy of the time of 1’38”065. Ivan Goi, Lorenzo Alfonsi and the wild card Michele Magnoni will complete the front row.

NEXT SEASON – During the meeting held in the presence of all the teams taking part in the CIV, the FMI Coordinator of the Road Racing Area, Alfredo Mastropasqua, informed the participants about the first novelties of the Campionato Italiano Velocità 2011 season. Next year the number of rounds will increase, as they will be eight instead of seven: the formula will be that of a double round in a weekend, which was already experimented this year in occasion of the Mugello appointment. In 2011, the circuits sceneries of the double rounds will be Misano and Mugello.

Even Sunday’s races timetables will be changed: the Stock 600 and Stock 1000 challenges will be anticipated compared to 2010, in fact they will be disputed in the morning. The 125 GP, the Supersport and the Superbike will take place in the afternoon. Another novelty is connected to tyres suppliers, in fact the unique tyre supplier will be introduced also in the new class, the Moto2, and will feature the two Stock classes as usual.

Here is a draft of the technical regulation.

MOTO2 – Two protagonists of next year’s Moto2 category have been presented today. The new Grillini Team rider has been revealed in the morning at the Bardahl hospitality: he will be 17-year-old Nicolas Stizza, who will challenge on board the GP 201 next year. “I’m very happy I’ll debut in this category because it’s going to be a new experience and I’m pleased I’ll face it with the Grillini Team – stated Stizza – I’ll do my best to try to get the best results”.

In the afternoon, in the press room, the Quarantaquattro Racing Team presented the new Tecstra by Motorace: the features of the machinery, which will be the protagonist of the 2011 Moto2 of the Italian Championship, were described by team manager Fabrizio Carmeli and the creator Pablo Di Sebastiano.

BOX EXPERIENCE – Tomorrow from 1:00pm, the crowd will have the opportunity of walking along the pit lane, getting to know riders as well as taking pictures with them

ONLINE – The live timing, races highlights, interviews and special contents of the five races going down at Misano will be available at www.civ.tv, the official web site of the Championship.

TIMETABLES, TICKETS AND PRICES – The CIV races will start at 2:00pm with the Superbike, to follow the Yamaha R6 Cup challenges taking place in the morning. The ticket will cost 20 euros (reduced ticket to 15 euros for women, people under 18 and FMI card holders, free entrance for children under 14).