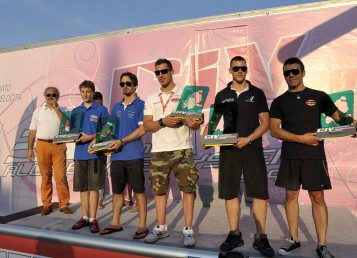 Misano Adriatico – The official qualifying sessions of the Campionato Italiano Velocità 2010 were disputed at the Misano World Circuit. Tomorrow, starting from 2pm, the five classes will be the protagonists of the racing day.

ON THE TRACK – In the Superbike the best time was set by Alessandro Polita (Ducati – Barni Racing Team) through the time of 1’36”464. Behind him there were Federico Sandi (Aprilia), Luca Conforti (Ducati) and Domenico Petrucci (Kawasaki). In the 125 Gp the Ellegi Team ruled the session: the team, headed by Francesco Milizia, got the first and second places respectively with Czech Miroslav Popov and Romano Fenati. Fabio Massei took another pole position in the Stock 600. The Roman Piellemoto Team rider (Yamaha) took the time of 1’41”886, which allowed him to finish in front of Giuliano Gregorini (Yamaha), Dino Lombardi (Yamaha) and Davide Fanelli (Honda). Domenico Colucci (Ducati – Barni Racing Team) was the fastest in the Stock 1000, followed by Muzio (Honda), Dell’Omo (Suzuki) and Bussolotti (Honda). The standings are available at http://www.civ.tv/circuito.asp?r=5&s=2010&a=1&c=1.

ROMAGNA REGION SUPPORTS TAMBURINI – 19-year-old Roberto Tamburini was the only rider from the Romagna region who reached the front row in one of the CIV five classes. After the great performance he got one week ago in Misano, at the World Championship, the Yamaha Bike Service Racing rider, took the pole position in the Supersport with the time of 1’38”928. Behind him there were Ferruccio Lamborghini (Yamaha), followed by Dionisi (Honda) and Giansanti (Triumph).

SURPRISE OF THE DAY – The rider revelation of the two official sessions was Manuel Tatasciore. The rider challenging in the Coppa Italia Velocità with a Sp machinery, reached the front row at his second race on board the JuniorGp Racing Dream Aprilia 125 Gp, ending behind Popov, Fenati and Tonucci. “Tomorrow it’s going to be a tough race but I’ve a great pace and I’ll do my best to stay with the front riders” said Manuel “I’ve to thank the team and the mechanics for the great job they’re doing and a special thanks to the Italian Motorcycling Federation for giving me this huge opportunity”.

ELECTRIC BIKE – The electric bike by Luciano Betti was presented today in the Press Room. The new machinery was revealed not only by Luciano, but also by his son and rider Luciano, Massimo Tucci (in charge of the electronic development) and Luigi Lucchetti (Vice President of the Energy Resources). “Since last year the CIV demonstrated its interest on the electric bikes and it had been a pleasure participating to this event” said Alfredo Mastropasqua, the FMI Road Racing Area Coordinator “we care about the electric field and we’re waiting for a clear message from the FIM”.

COMMEMORATING GIGI – During the pole positions prize giving the CIV wanted to commemorate Gigi D’Esposito, a historic name of the Italian Championship and the Superbike World Championship who passed away few days ago. The CIV team donated the board to the All Service System by QDP Team, since Gigi was its team manager.

THE MARCO PAPA BOOK– Another touching moment of the day was the presentation of the book “Marco Papa…scintille dal Paradiso” by Pier Paolo Vicarelli, the biography of the strong rider protagonist of the World Championship during the 80s-90s who passed away in 1999. On the stage, next to his Cagiva GP 500, there was his partner Ornella Calvi who worked together with Vicarelli to write the book.

“PINK” PIT LANE AND TICKETS – The “Pink Pit Walk” is going to take place at the CIV: tomorrow at 1pm the audience will have the chance to walk in the pit lane, get close and take pictures of riders and also receive lots of gadgets and free gifts from the Teams. The ticket will cost 20 euros (reduced ticket to € 15 for women, people under 18, FMI card holders and free entrance for children under 14)

ONLINE – The live timings of the sessions and races, the interviews and the analysis of the 2010 CIV fifth round are available on the Championship official website www.civ.tv.