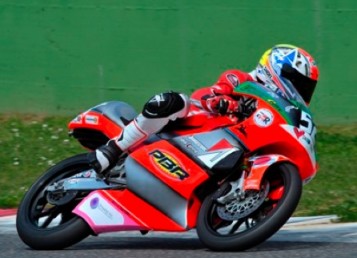 More than 150 riders challenging in the Campionato Italiano Velocità got to the “Piero Taruffi” track of Vallelunga today for the first round of the 2010 season. The double qualifying session determined the pole positions for tomorrow’s races.

JAPANESE SURPRISE – Since yesterday’s 125 Gp qualifying, Toshimitsu Gondo has been fast and today he gave his best. The 23-year-old from Osaka, representative of the Grillini Bridgestone Team, set the pole position through the time of 1’46”696 in front of Alessandro Tonucci (Aprilia – Junior Gp Racing Dream) and Mattia Tarozzi (Aprilia – Faenza Racing). “I was sure to do better, even because this morning I didn’t ride well – stated Tonucci – however, it wasn’t so bad. Tomorrow it’s important doing a great start and trying to pull away, despite the race will be long”. Romans Luigi Morciano (Aprilia) and Davide Stirpe (Honda) are now respectively in eight and fifteenth.

LOCAL DOMINANCE – Maybe it is the desire to do well at the home circuit or the firm belief to win the Italian Title this year. Anyway, Ilario Dionisi clinched the fastest time in the Supersport courtesy of the time of 1’39”180. “Reaching that time wasn’t so hard – said the Honda representative of the Improve Team – the bike is very powerful and the team work is amazing. Tomorrow I’ll do my best to win”. Behind him there was young Ferruccio Lamborghini (Yamaha – Media Action Prorace), who is officially debuting in the 600 class. The front row was rounded off by Roberto Tamburini (Yamaha – Bike Service) and Cristiano Migliorati (Kawasaki – Puccetti Racing. Danilo Paoloni was fifteenth overall on board a Yamaha machinery.

THE SAME AS BIAGGI – After the great performances obtained in the World Championship, as Max Biaggi did, the Aprilia also conquered the Italian Championship courtesy of the good race disputed by Federico Sandi. “This is my first challenge in the Superbike and starting with the pole is a great result – commented the 20 – year – old author of a fantastic time of  1’37”652 – Tomorrow it will be tough disputing an 18 – lap – race and I think we’ll be in 5 or 6 riders to battle it out. I’ll try to pull away”. The Gabrielli Michelin Racing Team fellow left behind a group of veterans such as Fabrizio Pellizzon and Alessandro Polita (Ducati – Barni Racing Team), second and third. They were chased by Borciani, Gentile, Cruciani, Petrucci, Brignola, Mauri and the other home rider Rufoloni.

A GOOD TIME – In the Stock 600 (Dunlop single tyre supplier), there was almost a 1 second gap dividing Fabio Massei from his closest rival. The Yamaha Piellemoto Team rider showed his confidence on the home track, clinching a time of 1’41”596, which was enough to make him conquer the pole position. “Everything was all right – revealed the 18 – year – old – I wasn’t expecting to reach such these times and to get this advantage. We immediately worked on the bike and found a great set up, which allowed me to reach an amazing race pace. We’ll see what will happen tomorrow”.

POLE TO A RIDER FROM MARCHE – Marco Bussolotti clinched the pole position of the Stock 1000 class, where Pirelli is the single tyre supplier. Through the time of 1’39”529, the All Service System by QDP Team representative prevailed on Ivan Goi (Aprilia – TRD Racing Cavazzin and Marco Muzio (Honda – Team Improve). Danilo Dell’Omo (Suzuki – Team Suriano Racing), starred in the free practices, and will start from the third row thanks to the ninth best time.

THE RESULTS – All the results and standings, the interviews and other news are available at www.civ.tv.

TV, TIME TABLES AND PRIZES – Tomorrow, the races will be live broadcasted free on sat on Sportitalia 2 (Superbike, 125 Gp and 600) and Nuvolari (Stock 600 and Stock 1000). The ticket will cost € 20 including the paddock access (reduced ticket to € 15 for FMI card holders, people under 18 and women, free entrance for children under 14). Free entrance for all the new FMI members belonging to the Motoclubs of Rome and Rome district. The race program will get underway at 10.55am with the Yamaha monobrand Championship, whilst the Superbike will be at 2pm, followed by the 125 Gp, Supersport, Stock 600 and Stock 1000.