Oppedisano: “STK is another thing but I will try” 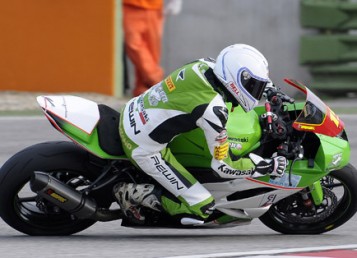 Winner of the Coppa Italia 2011 4T, Luca Oppedisano will debut at Mugello in Stock 600CIV. In reality, the rider from Genoa will not be a true debut (he had already raced the last round at Mugello 2011) but not the first race by stable writing the Italian Championship. The crown of the strongest of the Coppa Italia is a big responsibility to carry around in the paddock of the CIV but the 21 year-old from Genoa is ready for the challenge, riding the Kawasaki Racing Team Puccetti. “It has nothing to do with the 250 – Luca said during testing at Imola – accelerates 4 times as much, is much heavier and the brakes are really powerful. I’m trying to get used as quickly as possible, not easy but I’ll be ready for the first of the Mugello. “Right on the Tuscan circuit, last week, has proved its ZX-6R with the aim of taking measures in view of the opening stage. “That day was useful and also the weekend of Imola test helped me. I worked on the riding position and basic adjustments. What do I expect? To stay ahead, of course, but already know it will be tough because I will ride along with 40 other tough competition, many with more experience than I do about this kind of means “