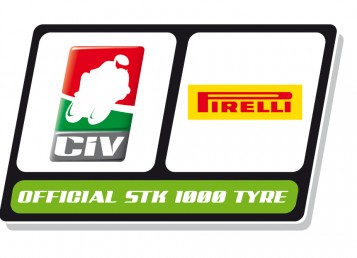 Pirelli announces the next evolution of tyre performance in the Superstock class with a newly sized Diablo Supercorsa tyre for exclusive national use in this year’s CIV Superstock 1000 championship, beginning from the first round at Vallelunga next weekend in Italy.
The new dimension, 200/55R17, already received positive feedback during the CIV pre-season testing sessions at Monza and has immediately confirmed its concept: to more adeptly suit the increasing performance characteristics demanded by today’s liter-class racing motorcycles. This new solution will continue its development on the world stage starting from the Monza round of the FIM Superstock 1000 Cup, where many of the CIV teams will participate as wild card entries.

The new 200/55R17 Diablo Supercorsa features an optimized profile for handling for an enlarged surface area on corner exits and a greater dissipation of heat. The tyre is the result of development efforts in the Superbike and Superstock classes throughout 2009, with the ultimate goal of increasing both consistency and performance. Both soft and medium specifications of this new size will be developed throughout the CIV Superstock 1000 season where the asphalt and temperature conditions remain less variable and shorter races allow a more suitable environment for soft solutions. In the FIM Superstock 1000 Cup instead, the more diversely capable SC2 compound will be raced, a more appropriate solution for the diversity of circuits which will be encountered throughout the remaining European rounds.

In 1999 Pirelli introduced a pure racing sized tyre, the 190/55 ZR17, and has it has since undergone continuous improvements with respect to its compound and structure. The acceptance of this tyre size has extended into a homologated Street usage, where it’s even featured as original equipment in the Diablo Supercorsa SP range. In 2009, it was decided to begin working on a completely new profile for compliance with ETRTO standards, thus officially instituting a new size for future homologation.

Giorgio Barbier, Racing Director for Pirelli Moto added: “We take each step of our tyre development seriously, and as such we’ve completed significant testing over the last few seasons in order to be certain that this next step forward is both a sound investment as well as a performance increase for the riders. The exclusivity of this tyre for the CIV Superstock 1000 comes as part of the new agreement as tyre supplier for the class, after which we shall introduce three proven specifications into the 2011 Pirelli racing range.”

Pirelli continues to develop new sizes and compounds for the different classes of the Superbike championship while always maintaining the same racing philosophy: ease of use and bike set-up, deployment and accessibility to the aftermarket and the use of Pirelli’s industrial capacity. This new tyre represents the commitment of Pirelli’s overall involvement in the CIV Italian Championship and shall also provide some interesting results in the FIM Superstock 1000 Cup, which is stacked up to offer some of the most exciting and diverse racing its 8 manufacturers and nearly 30 riders competing each race.