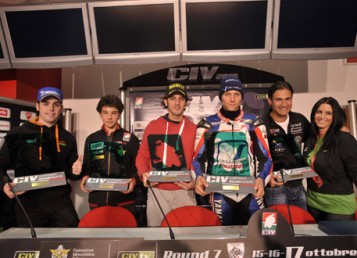 The fog which covered the Mugello circuit in the morning affected the official sessions of the seventh and final round of the Campionato Italiano Velocità 2010. Due to the delay, the starting grids were set at the end of single qualifying sessions, which were disputed by each class and which lasted 40 minutes each.

THRILLING SUPERSPORT – At the end of the qualifying, the five pretenders to the 600 SS Italian Title were framed in less than a second. At the head of the pack there was Gianluca Vizziello (Honda – Velmotor 2000), who clinched the pole position through the solid time of 1’54″479. Anyhow, the other rivals were right behind him and tomorrow they will try to put a spoke in his wheel, while they will be battling it out for the Title; today’s second fastest was young Roberto Tamburini (Yamaha), while Ilario Dionisi (Honda) ended in third. Ferruccio Lamborghini (Yamaha) rounded off the front row and the second one will be headed by Cristiano Migliorati (Kawasaki), who was fifth overall.

THE OTHER PROTAGONISTS – In the Stock 600 the best time was taken by Fabio Massei (Yamaha – Piellemoto Team): Championship leader wrapped up the pole position thanks to the time of 1’57″949 by ending in front of Simone Sancioni, Tommaso Lorenzetti and Berardino Lombardi. The three previous riders challenge on board Yamaha machineries. “Despite I faced some troubles with the grip I’m feeling very confident – said the poleman – the set up is great and tomorrow it will be important pulling away from the front. It’s going to be a tough race in spite of any weather conditions, anyway I’ll do my best to reach the Title”.

In the 125 Gp Luigi Morciano (Aprilia – JuniorGP Racing Dream) confirmed the wonderful performance registered in yesterday’s free practices and classified at the top of timesheets thanks to the effort of 2’01″275. The young rider overcame Alessandro Tonucci, Niccolò Antonelli and Massimo Parziani; all of them challenge on board Aprilia bikes. The two Title favorite riders, Miroslav Popov (fifth) and Francesco Mauriello (tenth) finished behind the front runners.

In the Superstock 1000, home hero Lorenzo Alfonsi (BMW – Kuja Racing) conquered the pole position start as he put his name on the time of 1’54″136 and he even set a new circuit record through his effort. Behind the Tuscan rider there were Luca Verdini (Honda), Andrea Antonelli (Honda) and standing leader Ivan Goi (Aprilia).

In the Superbike category the only Aprilia RSV4 on track reached the pole position through the time of 1’52″329: its owner is Federico Sandi, who finished in front of Danilo Petrucci (Kawasaki), defending Champion Alessandro Polita (Ducati) and Stefano Cruciani (Ducati).

THE RI211 BIKE WAS PRESENTED – After yesterday’s presentation of the Suter MMXI, the Rapid Inside RI211 machinery was introduced to the media today in the Mugello Press Room. The brand new bike was set out by Marcello Fantuzzi, Technical Director of the Rapid Inside Company. “Our target is being competitive nationwide through this bike, which is the natural development of the machinery we used in the World Championship, even if we improved it a lot”.

THE AWARDS OF THE CHAMPIONS– Tomorrow at around 7:30pm there will be a special moment that cannot be missed, the 2010 Champions award ceremony. The protagonist will be not only the CIV winners but even the leader of the Coppa Italia and Mini Gp. A huge buffet, music and lot of amusement will follow the ceremony.

CHARITY – The Cystic Fibrosis Research Foundation is once again the charity partner of the 2010 CIV. Caps and nice colorful bracelets will be on sale at Mugello and the money raised will be donated to FFC.

THE OFFICIAL WEB SITE – As usual, the Tuscan round will be followed in real time by the official web site, www.civ.tv, which contains results, standings, news, analysis and interviews at the protagonists.

SCHEDULE TIMETABLES AND TICKETS – The races will get underway on Sunday at 1:15pm with the Superbike challenge followed by the 125 GP, Supersport, Stock 600 and 1000. The riders who will mount on the podium will receive Victory trophies, La Riè Spumante sparkling wine, helmets by Shoei and Parmigiano-Reggiano cheese offered by the Consorzio del Formaggio Parmigiano-Reggiano. Entrance fee will be 20€ (reduced ticket to 15€ for women, people under 18, FMI card holders, free entrance for children under 14).