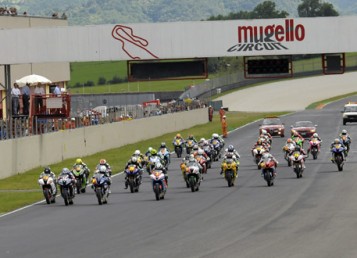 The 2010 CIV final round will be disputed the coming weekend on the Tuscan circuit of Mugello. The third round of the Italian Championship is worthy to be followed because at the end of the races 4 Titles over 5 will be awarded.

BATTLE AMONG 5 RIDERS IN THE SUPERSPORT – The most awaited race is the Supersport one, where five riders will battle it out for the Title: leader Gianluca Vizziello (Honda – Velmotor 2000) will be hindered by two young fellows Ferruccio Lamborghini (Yamaha – Media Action by Prorace Team) and Roberto Tamburini (Yamaha – Bike Service R.T.), who have one and three points respectively dividing them from the standings leader. They will be joined even by Cristiano Migliorati (Kawasaki – Puccetti Racing) and by Ilario Dionisi (Scuderia Improve), who are eleven and sixteen points far from Vizziello.

CONTEST BETWEEN POPOV AND MAURIELLO IN THE 125GP – The last race, which took place at Misano, reserved a surprise in the minor category: thanks to his victory, young Francesco Mauriello (Aprilia – Matteoni Racing) considerably reduced the gap dividing him from Czech leader Miroslav Popov (Aprilia – Ellegi Team); the latter was the protagonist of an unlucky challenge at Misano. At the moment there is only a five point difference between the two, so that the finale is still to be decided. The Aprilia JuniorGP Racing Dream duo, Armando Pontone and Alessandro Tonucci, will fight to reach the third spot of the podium

THE STOCK 600 FAVORITE IS MASSEI – Despite the off-color challenge of Misano, the favorite rider to conquer the Title in the Stock 600 is Fabio Massei (Yamaha – Piellemoto), who has 19 points more than rival Lorenzo Zanetti (TNT Racing Team) courtesy of the four triumphs he collected till now. Davide Fanelli (Honda – All Service System by QDP) and Dino Lombardi (Yamaha – Martini Corse) will defy each other to be third overall.

ANOTHER STRONG DUEL IN THE STOCK 1000 – In this class, the fight between Championship leader Ivan Goi (Aprilia – Ecodem Racing) and Luca Verdini (Honda – Emmebi Team) did not come to an end yet. The two amazing protagonists of the season are separated by fifteen points and for sure Goi will handle his advantage in the best way as well as Verdini will do his best to reduce the gap. Even the battle for the third position will be worthy to be followed as it will see Dell’Omo, Bussolotti, Colucci and Baiocco battling it out.

THE SUPERBIKE ALREADY KNOWS ITS WINNER – The only rider who won the Title in advance was Alessandro Polita (Ducati – Barni Racing Team), who conquered the Superbike crown thanks to the second place clinched at Misano. “I would like to go out from the CIV with a bang – stated Alessandro – I couldn’t make it in the previous races because I had to think about the standings so that I couldn’t take too many risks but on Sunday I will push hard and I’ll try to do a perfect race”. The other two steps of the 2010 podium will be wanted by team mates Stefano Cruciani and Luca Conforti, who are respectively second and third in the Championship.

HERE IS THE SUTER MMX – The Suter MMX will be presented tomorrow afternoon at 6:00pm in the Press Room as the machinery will be the protagonist of the 2010 CIV next season in the Moto2 category. The bike will be also exhibited in the paddock for the whole weekend of the Italian Championship round.

OFFICIAL RADIO – Radio Blu Toscana will be the official radio station of the Mugello round and it will come along with the CIV appointment by promoting the event before the race day and it will also launch a funny contest for its audience and free Sunday’s tickets will be up for auction as well as a track lap on the two-seater Yamaha.

INTERNET AND MOBILE – The Misano round can be followed also through the official web site of the Championship, www.civ.tv: news, exclusive interviews, photos, videos and much more. It is possible subscribing to the Newsletter (http://www.civ.tv/newsletter.asp) in order to be updated on all the activities concerning the Road Racing events. Furthermore, through the Feed Rss (http://feeds.feedburner.com/civ), it is possible automatically receiving, every 24 hours, the website news at your inbox. The Civ.tv news are also on mobile phone, check it out at www.civ.tv/mobile.

TIMETABLES, TICKETS AND PRICES – On Friday, the free practices will get underway from 9:00am, whilst the qualifying will take place at the same time on Saturday. All the races will be disputed on Sunday starting from 2:00pm. The ticket to enter at Sunday’s races will cost 20 euros (reduced ticket to 15 euros for women, people under 18 and FMI card holders, free entrance for children under 14).)