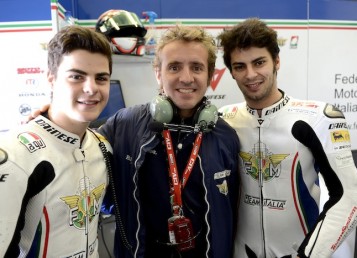 In the first two forty-minute sessions in Qatar, Romano Fenati confirmed the progress shown in Jerez de la Frontera during the IRTA tests. During his first outing, the 16-year-old from Ascoli posted a 2’10”922, which granted him the 5th position. In Free Practice 2, the Team Italia rider tried some setup changes on his FTR Honda and closed the day with a 2’09″652 , in 12th place, with a 1”492 delay from front-runner Viñales.

Alessandro Tonucci also had a positive run in the desert. He was 17th after the first session, and held on to the position in the second with 2’10”533, 1”8 faster than his previous best time.

“I’m pretty satisfied with my result today. After doing a few laps to get acquainted with the track, we tried different setup solutions. We will try to do better tomorrow. The front runners are strong, but we are not too far.”

“Overall, the bike works well and with a few changes in the setup we can reduce the gap from the front. As far as the championship goes, given the even level of the bikes on the grid, Italy can put up a challenge.”

“For the first day, our riders scored some good lap time. We must keep in my mind that both the riders and the bikes were debuting on this track. We will aim at the top 10 tomorrow.”