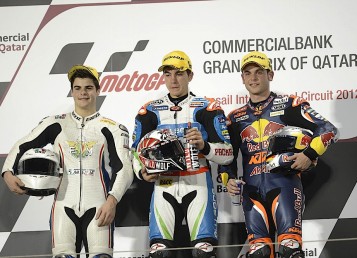 Great debut for “Fenny”, second behind Viñales. Unlucky race for Tonucci, hit at the first corner

Romano Fenati and Team Italia FMI (his orchestra) scored a debut for the ages in the Moto3 championship. The 16-year-old talent from Ascoli showed both strength and maturity from the get-go, conquering the first position at the first corner. The Italian tried to get away early on, but Viñales caught up by lap 5. The two showed a relentless pace, leaving behind a group of seven riders and posting similar times until lap 13, when Viñales got away. Romano opted not to take any risks and drove with precision, bringing his FTR Honda on the second step of the podium. Cortese ended in third place, 14 second behind. Fellow Team Italia rider Alessandro Tonucci was unlucky, as Moncayo hit him at the first corner. “Tonu” could not rejoin the race and was forced to retire.

“I’m elated. To score a podium at my debut is a great satisfaction, and testifies the hard work and sacrifices I make everyday during practice. I want to thank my family, especially my grandfather Romano, and the Italian Federation that equipped me with a great bike and experienced mechanics. I wanted to win, but it’s all right. We are heading to Jerez confident to keep up the good work and, if possible, improve our results from Qatar.”

“I’m disappointed I basically didn’t have a race. I was closing on the inside in the first corner when I was hit from behind and couldn’t resume my race. I think I could have been fast, I constantly improved throughout qualifiers and had a good feeling on the bike. I’ll make up for it in Jerez.”

“This result is a good payback for the work we kept doing in the dark throughout the winter break. I want to thank the whole team, mechanics and technicians who contributed to this small masterpiece. We are not even remotely done, but this was a good first step. I want to extend my appreciation to the companies that supported our journey thus far: FTR, Honda, Geotechnology and Dunlop. Many thanks also to whoever took a gamble on our “youth project” for 2012, such as Dainese, AGV, Do Design, Eni and Mugello Circuit. Team Italia FMI is officially back.” 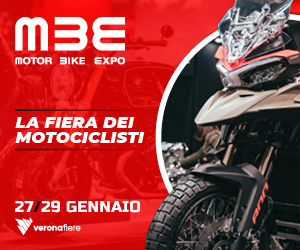 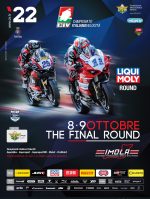