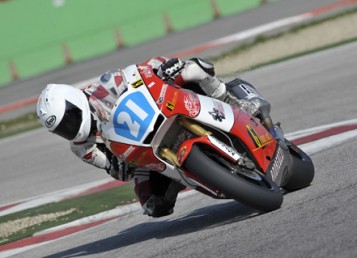 Last year, the Moto2 has lived his spectacular rookie season in the flag and this year is poised to deliver an encore. Ready for the encore so is the Italian champion, Alessandro Andreozzi: after his table number one, the talent from Marche region is ready to race with his team Andreozzi Reparto Corse to defend the scepter of the fittest. Against Alessandro will be Ferruccio Lamborghini and Robbin Harms: the first, ex-champion of the Stock 600 will try to redeem the most affected by a 2011 accident and will do so in the saddle with Tenkate of Team Quarantaquattro and the Danish with world Supersport experience, will rely on the Bimota by Edo Racing groped for the assault on the Italian title.