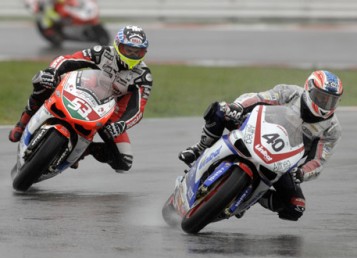 Rain did not obstacle the five races disputed today at the “Misano World Circuit” at the 2010 CIV sixth round.

SBK: POLITA IS THE NEW ITALIAN CHAMPION – The Superbike riders were the protagonists of a thrilling race under the Misano downpour. The challenger who immediately moved at the head of the pack was Alessandro Polita, lately overcome by the Althea Racing Team fellow Flavio Gentile. At mid race Danilo Petrucci (Kawasaki n. 9 – Pedercini Team) faced an unexpected slide and left the scene, whilst there was another surprise at the seventh lap as Stefano Cruciani (Ducati n. 12 – Barni Racing Team) crashed out. The latter was the closest rival of Polita in the standings but after today’s result he had to abandon the idea of battling it out for the title. Conforti (Ducati n. 24 – Barni Racing Team) was living a positive race staying in second behind Gentile and in front of Polita and Brignola when he crashed at the last corner and gave the green light to his team mate, the conqueror of the SBK Title. The winner of the round was Flavio Gentile, who put his name on the first victory reached on board the Ducati n. 40 of the Althea Racing Team.

Alessandro Polita was satisfied too, as he took the title on board the Ducati n. 53 of the Barni Racing Team. “My start was great but maybe I didn’t manage well my advantage as Flavio recovered – said Polita – we worked a lot on the set up to use in dry conditions and just a little bit on the one to use on wet track that’s why I had some problems at mid race. I was already thinking about Mugello when Luca gave me that big present. I want to say thanks to the Team for the support, to the sponsors and to all the people by my side”. Norino Brignola was third on board the Honda n. 1 of the Nuova M2 Racing Team and today he redeemed a season featured by a lot of up and down moments.

The 125 Gp was won by Francesco Mauriello (Aprilia n. 43 – Matteoni Racing Team), who benefited by the unlucky race of Championship leader Popov and moved to the head of the standings. Behind him there were Davide Stirpe (Honda n. 63 – CRP Racing Team) and Japanese Hiroki Ono (Rumi n. 76 – Rumi 125 GP Team).