Misano Adriatico, the stage of the CIV fifth round 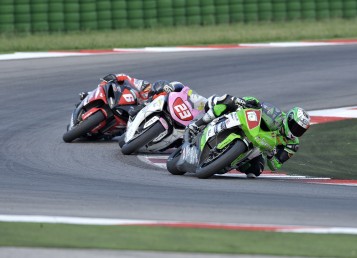 Misano Adriatico, July 4th 2010 – The fifth round of the 2010 Campionato Italiano Velocità was disputed today at the Misano World Circuit. The categories protagonists of the day were the 125 Gp, the Superbike, the Supersport and the two Stock, 600 and 1000, with the 130 accredited riders at the Italian Championship.

MISANO “MASTER” – Pole, victory and many important points for the standings. Roberto Tamburini was back at the Misano Adriatico circuit with three reasons to smile. The rider was the protagonist of the Supersport race he disputed today at his home circuit: he did a great start from the pole position and opened a gap over rivals on board his R6 machinery of the Bike Service Racing Team and finished with the victory taking the chequered flag with a 10 second advantage. “We had a very good race – stated Roberto – it took me two laps to overcame them all and then I kept the rhythm I set in the practice session. I want to thank my team for the work they did in these days and we hope to carry on in this way at the next rounds as well”. Second place went to Ilario Dionisi on board his Honda bike of the Improve Team whilst Cristiano Migliorati (Puccetti Racing – Kawasaki n. 3), Vizziello (Honda) and Barone (Yamaha) rounded off the top five.

VICTORY FINALLY – After ending three races before the due time, Federico Sandi was able to take the chequered flag in the Superbike as he was the winner of the category. The Gabrielli Michelin Racing Team rider (Aprilia n. 23) pulled away from the front row and opened a gap over the Barni Racing Team trio: Polita (n. 53), Conforti (n. 24) and Cruciani (n. 12). Federico was good at managing the half second advantage especially in the final laps, when Alessandro Polita pushed hard overcoming team mate Conforti and tried to reach the head of the pack. “We did a great race –said Sandi- I started from the pole position and I kept my rhythm trying to avoid mistakes. In the final four laps the rear tyre was worn-out but I was able to manage my advantage”. Championship leader Polita took the second spot, and courtesy of this result he extended his advantage, whilst Conforti mounted on the third podium step. Fourth place went to Stefano Cruciani and Marco Borciani (Ducati n. 21) ended in fifth.

ELLEGI RACING DOMINANCE – The 125 Gp was an elimination race. The surprising rider in the first laps was Manuel Tatasciore: the JuniorGp Racing Dream Team rider (Aprilia n. 73), who challenged for the second time on board a Gp machinery, immediately created a gap but before mid race he crashed at the Carro corner and had to say bye to the victory. So that, Nazzareno Lumina (n. 11) grasped the leadership but soon after it he crashed as well. In that moment the Ellegi Racing Miroslav Popov (Aprilia n. 95) defeated bad luck and prevailed on Romano Fenati (Aprilia n. 5 – Ellegi Racing), Niccolò Antonelli (Aprilia n. 23 – Gabrielli Racing Team) and Armando Pontone (Aprilia n. 80 – Junior Gp Racing Dream). “The race was good even this time -stated “Miro, who grasped his third consecutive success- I won also here at Misano and now I’ll be seeking as many points as possible until the end of the Championship”.

ASTONISHING FANELLI – The Stock 600 started again after it was red flagged, because Moschini’s bike broke, and it was the most spectacular race of the day. In fact, five riders battled it out for the podium: the victory went to the 19-year-old Davide Fanelli (Honda n. 127 – All Service System by QDP), who clinched his first success of 2010. “My start wasn’t so good, but I immediately got my rhythm was fast and when I saw Massei was having few problems I attacked him and I made it –revealed Davide- it was a tough race and I’m happy I won it. I want to dedicate it to Gigi D’Esposito..”. Lorenzo Zanetti (Team TNT Racing – Yamaha n. 8) placed in second whilst third position went to Fabio Massei (Yamaha n. 34 – Team Piellemoto). Lombardi (Yamaha n. 13 – Martini Corse) and Russo (Yamaha n. 84 – Bike e Motoracing) missed the podium as they were respectively fourth and fifth, whilst Mercado, Vitali, Sancioni, Marcheluzzo and Biaggi finished behind them.

KAWASAKI STARRED – Even the Stock 1000 race was red flagged at the fourth lap as Domenico Colucci bike (Barni Racing Team – Ducati n. 89) broke. The latter had been heading the field until that moment. At the second start six contenders were struggling for the victory: at the end Davide Giugliano (Suzuki n. 34 – Team 06) triumphed but he missed the podium as the combined standings put him down the podium, as he was fourth in front of Danilo Dell’Omo (Suzuki n. 9 – Suriano Racing). The winner was Matteo Baiocco (n. 15) thanks to a 66 cent of a second advantage. The Kawasaki rider of the Pedercini Team clinched the first victory of the season and now is fourth in the Championship standings. “I’m happy with this victory, it represents the improvement the team and I made since the beginning of the Championship –said the winner- I want to thank the Pedercini Team and now I’ll be looking forward doing a good job in the final races”. Second classified was Marco Bussolotti (Honda n. 5 – All Service System by QDP), tricked in the final lap after an amazing race. The third podium step went to the Mugello race winner Luca Verdini (Honda n. 23 – Emmebi Team), who collected important points for the standings damaging Ivan Goi position, who was only seventh today.

CIV ONLINE – All the interviews and news about the Misano Adriatico round are available at www.civ.tv