Lai with Althea-Echo: “I have all to do my best” 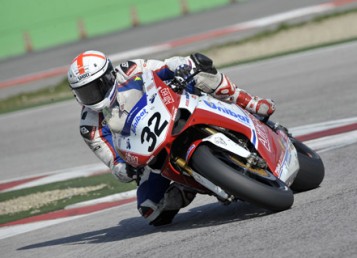 It ‘was Italian champion in the 125 and now, after a few years “fluctuating”, trying to do an encore in the Superbike tricolor. Sunday at Mugello, the 34 year old from Milan Fabrizio Lai will take part in the Ducati team managed by Genesio Bevilacqua, a structure that has won the World Superbike Championship in 2011 with Carlos Checa. “The bike is great and I have everything to do well: the team has remained the same as last year with Maurizio Perlini to serve as technical director and plus I aid at sporting brothers Coppola, that experience will have to sell. Better than this … “

At Imola, last weekend, attended the first official test on the Ducati Althea Racing by Echo even if he had shot the previous Tuesday at Mugello for two days of testing badged Michelin. “After five months of forced stop was a tough shoot, but the measures I have already shot at Imola stronger than when I came to race the world round with the CBR … I am calm because although there is still a lot of work to be done and I know what I’m ready to start. The potential compared to last year is much higher, I make some progress both in the chassis that feeling with Michelin, but we are on track. Objective of the Mugello? The podium,obviously “