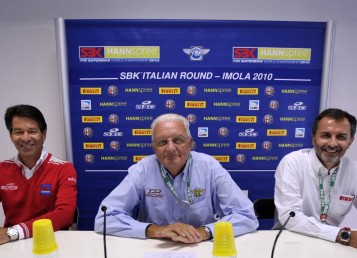 At Imola during the WSB Round Mr Paolo Sesti, the chairman of the Italian Motorcycle Federation, presented the Team Italia Velocità Project, which will also be involved in SBK with 3 riders in Supersport, Superstock 600 and Superstock 1000 from 2011.

Imola, September 25th – Following in the footsteps of past success in Superbike, Team Italia Velocità is ready to come back as a protagonist in Supersport, Superstock 600 and 1000 for the 2011 season. It is a clear demonstration  of the commitment of supporting new Italian talent at an International level, through concrete and direct support by the Italian Motorcycle Federation. For the Team Italia Velocità riders this will mean racing in the World Championship with the possibility of growing up in a professional environment which will be completely devoted to sporting activity. Italian motorcycling can already count on young and successful talent on which it is working constantly, in the belief that talent should be built up since the junior categories.

This choice is supported by important achievements such as the success in Pocket bike and MiniGP European Championships as well as in the Italian Championship (CIV, Italian Cup and many junior Trophies).

In the Italian Championship it is worth mentioning Supersport rookies Ferruccio Lamborghini and Roberto Tambunini, who are on the top of the standings at their first participation. Also Superstock 600 is producing some surprises: championship leader is Fabio Massei, followed by Superstock 1000 Cup protagonists Lorenzo Zanetti and Davide Fanelli.  Another outsider in the Superstock 1000 championship is Andrea Boscoscuro, current Italian Champion of Superstock 600: a second place for him during the last Misano Round. Top level performances have also come from Danilo Petrucci and Federico Sandi, Superbike rookies who are facing experienced riders such as Polita, Borciani and Cruciani.

There are also many talented riders who are inflaming the Italian Cup (Coppa italia): Manuel Tatasciore, Luca Oppedisano, Christian Gamarino and Andrea Mantovani battled for the final podium and title at the last race.

Italian talent is also flourishing in the trophies. Amongst them Andrea Zanella and Martina Fratoni in the 250 4S Moriwaki Trophy, Luca Fabrizio and Niccolò Lagiongada in the PreGP Italia Trophy, Benito Tarantino and Lorenzo de Simone in the 250 Kawasaki Junior Trophy. Vivacity also in the “small wheels” categories where FMI directly follows a group of 8-13 year old young riders during their growth in the sport.

“The aim of the initiative is to launch Team Italia again in the Superbike World Championship, something that over the years has allowed many talented Italian riders to come to the forefront on the international scene – declared Paolo Sesti, President of the FMI – We will be doing it with the support of Infront and Pirelli, whom I would like to thank for believing in our project. We will have three riders involved in Supersport and the Superstock 600 and 1000 categories and we will try and help them to grow in the best possible way in three apprentice but hard-fought categories. The aim, one day, is to get them to race in World SBK”.

This project is approved in full by Infront Motor Sports and its CEO Paolo Flammini, who has always had faith in this type of activity, dedicated to young riders coming from National championships, through the support of the various Team Italia in the Superbike circus since 1998. “Infront Motor Sports firmly believes in a strong rapport with the national federations with the aim of promoting and supporting the participation of young riders in international championships  – Flammini said – the introduction of the Superstock 600 and 1000 championships by us was designed to create a path that takes young riders up from a national to a professional level, and the initiative that we are developing together with the FMI and Pirelli is the concrete application of these projects”.

Pirelli tyres, exclusive partner of the Superbike World Championship, will be ready to support this initiative as technical partner with a 2 year contract with the Italian Motorcycle Federation with the aim of increasing the value of the best Italian talent on the track. “This year Pirelli created a sort of scholarship for the winner of the FIM Superstock 1000 to participate in WSBK in 2011 and after this experiment, the value and the need to bring new Italian talents into the World Championship is clear – said Giorgio Barbier, Pirelli Motor Racing Director).  We will participate in this project not only as sole supplier to WSBK, but for offering an opportunity to young riders of the national series to move towards a more international scope in the WSBK. Pirelli, as early as the 80’s was involved in this FMI project which worked in tandem with participation in the 500cc European Championship (Errico, Fugardi, Papa) and today is honored to return to this same spirit with the FMI and Infront”.

Team Italia Velocità, with the support of Infront and Pirelli will develop a 2 year  project, with the involvement of 3 riders in the Supersport, Superstock 600 and Superstock 1000 classes and of Cristiano Migliorati as sport director. The 3 riders’ names will be announced on October 17th during  the Italian Champions 2010 Awards Ceremony at Mugello.