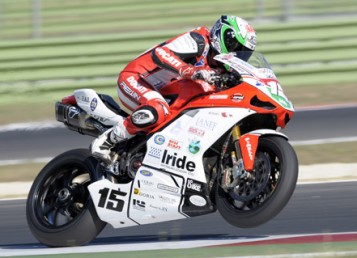 Many took to the track today at Imola for the first test day dedicated to the Italian riders of speed. There were the pilots of the CIV, all three of the Italian champions in office Ilario Dionisi (Supersport), Alessandro Andreozzi (Moto2) and Matteo Baiocco, who is back riding the Ducati Team Barnet. “The first day wentwell, because we are allocated using the basic setup found at the global stagelast year – said Baiocco – six pounds heavier, added by regulation, make you feel but we are certainly organizing and today I would say that it was not bad.Tomorrow we will work on the balance of weight, especially on the fork it here with all these ups and downs is really put under pressure. “

In addition to the three holders of the table flag, the other famous names of Italianin the Imola circuit on the weekend are to Alfonsi, Corradi, Velini (back to STK after the experience in Supersport), but also Cruciani, Goi, Clementi, Morbidelli,the 2011 Cup winners Italy Oppedisano and Rinaldi then Giansanti, Conforti,Monti, Goi and Nannelli. There are also other major players of the past season asVitali (Italy Team arrived at following in the footsteps of his father), Calia, Cocco, Russo and Lamborghini.

Today, many of them have dusted off their suits, the measures taken to old (or new) bike paths and passed back to mind after months of “withdrawal” by the track. Tomorrow we will return in earnest: in exactly one week, we are the firstofficial practice of the CIV to be addressed and this is an appointment with gold.