Imola test, Andreozzi: “I want to fight with SS” 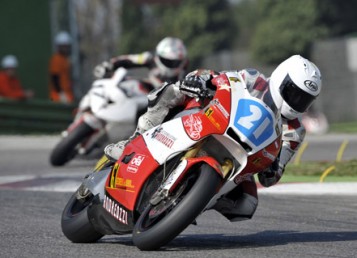 He was presented to the test in Imola with the usual number 21 on the hull but in reality he would correspond more to the second digit, which marks the strongestin its class. Alessandro Andreozzi is the first official release from Italian champion and this year’s Moto2 all eyes will be on him. “I came to Imola to learn to run on this circuit, never seen before – says the Marches – we tried some solutions at the level of cycling but as far as the bike has remained unchangedthroughout the 2011 season. Budget we have and we preferred not to do small jobs. “
The stated goal for this year, is to keep as much as possible the group of firstSupersport, demonstrating the potential of the bike “signed” Andreozzi Racing Department. “I wish all games would end as the last of the Mugello 2011, during which I managed to fight until the end with the top riders of Supersport. TheMoto2 this year? We are a little less than last season but the names, from Harms to Lamborghini, they are all valid and point to stay ahead of them. “