Imola, italians at the top: the CIV good work 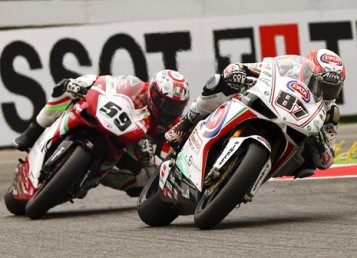 Riccardo Russo’s victory in the European Superstock 600, third place Eddi La Marra in the Superstock 1000 FIM Cup, the fourth of Roberto Tamburini in World Supersport. And then Zanetti, Giugliano and Canepa major players in the Superbike. It ‘was Grand’Italia yesterday in the first of three italian stages of the championship for motorcycle production-based series. And it was great CIV.
Yeah, because all the riders mentioned above, one way or another have had or still have to do with the national championship of speed, more and more a springboard for the talents of our house. After Romano Fenati and Niccolò Antonelli, passed in 2011 to CIV before rushing to the top of the world’s pre-season testing Moto3 this year, it was the turn of the nursery blue of the “Super. ” Russo, 19, of Aversa from Campania, has finished second last year the season Stock 600 CIV behind Lombardi but by the beginning of 2012 occurred on the track with the best intentions. Winner of the first round of the tricolor Mugello, Saturday made his first international race, dominated from start to finish with the attitude of the sample in the Yamaha Team Italy IMF.
In the same category, to report the excellent fourth place in the writing of another permanently to CIV, Nicholas J. Morrentino (Yamaha – Elle 2 Ciatti) and performances by top ten Morbidelli, Casalotti and Gamarino in the order from seventh to ninth place.
Great was also the Lazio rider Eddi La Marra. After some good performances in the European Stock 600 (among them the victory in 2009 just round the Imola) and some appearances in the CIV 2005 to 2011, then aged 21 from Ferentino has a weekend to remember: Poleman of Saturday riding the Ducati Barni Racing Team Italia, then took the new Panigale yesterday morning to conquer the first international podium, brushing for one second the “bang” of victory.
About CIV, to be reported in the same class as the sixth place of the Italian champion Stock 600 2010, the Roman Fabio Massei. Eighth overall, however, the teammate of La Marra, Lorenzo Savadori, Italian champion in the 125 GP 2008.
Promising the fourth place hit by Roberto Tamburini in the Supersport race. The Romagna rider is now one of the faces of the CIV and historians thanks to tri training gym is trying to establish themselves in the World 600. His is one of the paths “perfect”: third in 2009 in the category dedicated to the young, Stock 600, won the national title the following year in Supersport and tried to repeat in 2011, stopped only by Ilario Dionisi. As the rider of Team Lorini Honda after so many seasons of Yamaha, finished third the first round of the CIV in Mugello and at Imola has touched another podium, the world still proving to have the numbers to keep the flag flying Italian champion in the field.
Italian colors highlighted thanks to Vittorio Iannuzzo fifth, eighth and ninth Antonelli and Roccoli. Of note is the excellent recovery of Baldolini, eleventh at the finish.
We close with the three most beautiful signs of this week-end champion: meet the names of Lorenzo Zanetti, Davide Giugliano and Niccolò Canepa and represent the hope of generational change for the World Superbike motorcycle racing blue.
Zanetti, 24 year old Brescia, was a little lost after an unfortunate in the 125 World GP: broken in 2010 by the Italian Championship, which has relaunched with a strong second place finish behind Massei, was one of the protagonists of World Cup last year (including one win and third place as a wild card in tricolor) and yesterday he ran two races really practical to complete the difficult second appearance Superbike Championship with Ducati Racing Team Pata: in the second round finished thirteenth but it is the first that gave the best, coming to conquer the fifth position before the close of the eighth round, however good, get ahead of riders like Laverty, Melandri and Lascorz.
A great second run has the ride instead Davide Giugliano, that CIV has won, among many top performances, the title of vice-champion 1000 Stock in 2008. The young Roman, riding the Ducati Althea Racing, wanted to redeem early exit from the scene of race 1 (caused by contact with another driver) and ran with a knife between his teeth, enhancing the public at Imola: with a great comeback came up to fifth place, passing between the other more experienced riders as Rea, Laverty, Melandri and Smrz and coming in right behind Checa, Sykes, Biaggi and Haslam until it is … ran out of petrol. A technical problem that has denied the joy of the final result but that the third absolute Superbike race, made him understand that he can fight with the best.
Same goes for Niccolò Canepa, who competed in the CIV two entire seasons Supersport in 2005 and 2006, with a podium at Misano for the best results. The Genoese forces Team Red Devils in Rome, he finished tenth in the first round while the second was to fight for the top five just behind Giugliano before an ordinary slide (without consequences) ko put his dreams of glory. He, however, has proven to be able to travel safely in the group that counts, riding a bike very well prepared by a team in his debut World.
Load these guys liability larger than themselves, the second race of the season, is perhaps too much. Announce that they are the Biaggi, Melandri and Fabrizio’s future can be counterproductive. For now have fun, try to give my best and learn the tricks of the trade. One thing is certain: they drove over the problems, as do their colleagues for years the British and Australians, showing a great desire to get ahead. If this is the “right-generation” capable of churning out new Italian world champions, we’ll know in a few years. For now … well, good, bis.