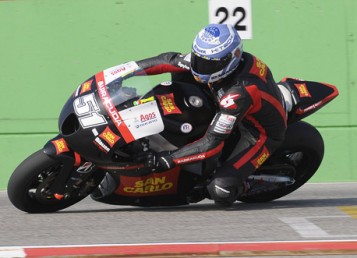 It were concluded in Imola the first practice sessions that officially have opened the season of the Italian Road Race. From Friday to Sunday have been 377 the riders committed to finding the right set-up in view of the first events of 2012. There were the protagonists of the CIV, those of Italy Cup, Trophy and some illustrious name of the licensed FMI.

The occasion, especially for members of the tricolor, is tempting: a week in fact, is scheduled at Mugello the first race of the year and many have used these three days to increase the feeling with their bikes. But there are also the pilots in the world.One on all the Apulian Michele Pirro, former Italian champion Supersport Team Gresini rider is trying to address the CRT with which MotoGP 2012. “Finally I managed to prove my CRT, the bike with which I deal with the MotoGP World – said the former Italian champion – It ‘was a real” shakedown “during which we tried to verify that everything worked in the best way. We were also able to define, and while making a few laps, where and how to intervene in the next test in Jerez. We are aware that so much work to do but we are extremely confident. The potential is very high so if we will make the right choices we can do well. A few turns are not enough to make proclamations in all of us but the enthusiasm is great and this climate will help us to continue to this challenge. “

There is great anticipation for the outcome of this test to see how all is the evidence of the winner of the first World Supersport race of the season, Kenan Sofuoglu (Kawasaki Deltafin). The turkish, direct to the box from another old acquaintance of the CIV, Vanni Lorenzini, was unlucky protagonist of a crash this morning, was taken to hospital for tests at Imola but in the afternoon, just back on track suffered a problem leg and was forced to return to the pits.

Among the other drivers present, in addition to members of the CIV also the “world” The 1000 Stock Marra, Baroni, Barrier and Savadori. Of note is Lanzi, Baz, Morais, Leonov, Bradley Smith and two young sons of art Dakota Mamola (Randy’s son, engaged in the R6 Cup) and Kevin Chili, son of Pierfrancesco.