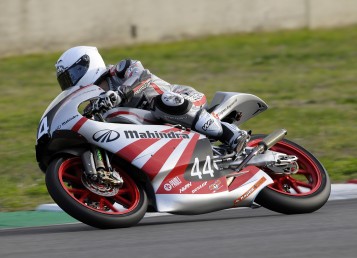 In the last race held at Imola CIV 125 (season 2006) was one of the protagonists of the 1000 Stock World of today, Lorenzo Baroni, on crossing the line first ahead of Simone Sancioni and Luca Verdini.
Who will take his “dusty” witness Sunday, during the second round of the 2012 flag? As seen at Mugello, Riccardo Moretti seems to have an edge over their opponents. The Romagna rider, former champion Italian forces in the bike-new this season (the Indian Mahindra, which has aroused so much interest in the paddock at Mugello) won for posting the opening round and will start to be favored also in Imola. To combat it we will try two very young, and in Tuscany have been shown to have the numbers to constantly hit the podium positions and talk about Lorenzo Dalla Porta and Andre aMantovani.
The first, fourteen Tuscan, is to debut in the CIV and riding the Aprilia Team OR by 2BRacing – Zack M. in the first test had the better of a murmur on the 17 year old Ferrara rider Andrea Mantovani (Aprilia), well done too close to the podium already in the opening stage.
A benefit among the top three will certainly the Roman Simone Mazzola (Aprilia – GTRacing Publisport), also in the domestic season after the good performances of the Coppa Italia: Mugello finished sixth behind the two German wild card Enderlein and Alt but before the French Arciero (Aprilia – Ellegi Racing) who will also participate in next Sunday. Among other members, Cristiano Carpi, Alex Calgaro and the Indian rider Sarath Kumar, team mate of Moretti that at Mugello forced to retire with technical problems.