Imola, CIV: who will wins the first Moto2 race? 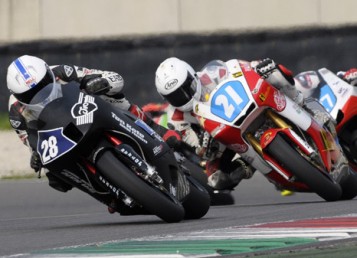 Sunday will be the first time ever for Moto2 in Imola: the category, which he did last year entered the CIV will make its debut at the historic Italian circuit that since 2006 the theater was no longer races tricolor.
A further stimulus to the current champion Alessandro Andreozzi, to bring home the second consecutive win of the season. The Marche rider, the bike prepared by Andreozzi Reparto Corse, has been good to hit the top spot at Mugello with a second stint really concrete (which allowed him to pull his rivals) but Sunday will give the maximum to replicate the result.
Because his opponents Ferruccio Lamborghini and Robbin Harms are ready to overturn the prediction. The Bologna-bearer of Quarantaquattro Racing, finished second to 1’743 by the winner but took home the confidence to fight with Andreozzi. Same goal for the Danish Harms, riding the Bimota by Edo Racing, more difficulties at Mugello but decided to surrender since the second round.