Imola, CIV: many riders for the Moto3 victory 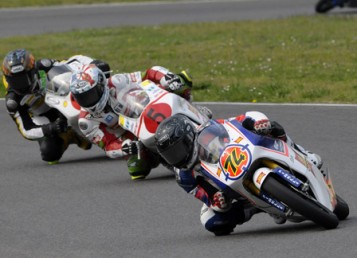 They’ve played in three until the final corner at Mugello, Imola and Sunday to try to replicate the excitement of the historic first race: the Romagna rider, Matteo Ferrari (San Carlo Honda Junior), the Imola Kevin Calia (Honda Elle 2 Ciatti ) and Andrea Locatelli from Bergamo (San Carlo Honda Junior), the order arrived on the podium at round 1 will have different motivations for first place. Ferrari, 14 years old Rimini at his debut in the CIV, try to do an encore to stretch in the standings ahead of the competition. It ‘was one of the best surprises of the first race will race to become a reference of the 2012 season.
Reference, for some years now, so is Kevin Calia. The Imola Team 2 Elle Ciatti, passed to Moto3 from 125 Gp, will play at home and will try to win in front of his fans as he narrowly escaping during the first round: the victory.
First place will look for another young, 15 year old from Selvino, Andrea Locatelli, Moriwaki Trophy winner in 2011, Andrea has created a splendid battle at his absolute debut in CIV and certainly does not pull back even Sunday, when falling on track to do better than third at Mugello.
The three will have to deal, among others, with two bishops Team Italia Gabrielli,Manuel Pagliani and Michael Ruben Rinaldi (on Oral M3) before retiring due to technical problems in Tuscany have long battled for the top three positions . To follow race for Luca Marini (Bierreti Racing Honda), winner of the 2011 and MiniGP absolute beginner to the CIV.