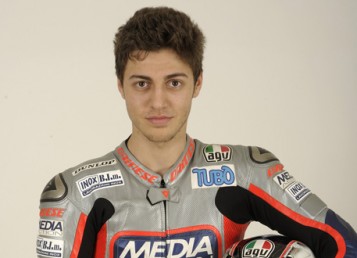 The free practices of the sixth and penultimate round of the 2010 Campionato Italiano Velocità were hosted at the “Misano World Circuit” on Friday.

THE DAY – The surprising challenger of the two free practice sessions, featured by rain fell in the morning, was Luca Vitali: the 18-year-old rider from Bellaria, member of the Media Action by Pro Race Team, set the best time of 1’43”487 in the Stock 600 on board his Yamaha machinery overcoming Zanetti, Fanelli and Sancioni. “The target is staying in the front group and battling it out for the victory, or at least demonstrating I can stay among the fastest – said Vitali – the feeling on the bike is good and on Saturday we will try to improve the rear traction. I’m feeling very confident anyway”. Championship leader Fabio Massei (Yamaha – Team Piellemoto) was only 32nd as he preferred staying at the box during the afternoon session.

A home rider starred in the Supersport as well, where Roberto Tamburini (Yamaha – Bike Service Racing Team) grasped the fastest time. The 19-year-old rider was under the barrier of a minute and forty seconds through the time of 1’39”851 and ended in front of Dionisi, Ciavattini and Velini. “Friday was great and on Saturday we’ll work on the final adjustments – said Tamburini – the set up itself is working well and I’m seeking the victory in order to improve my position in the Championship”. Standings leader Lamborghini (Yamaha – Media Action by Pro Race) classified in 11th.

Stefano Cruciani (Ducati – Barni Racing Team) put his name on the best time registered in the Superbike thanks to its 1’38”174. The rider from Urbisaglia overcame team mate Luca Conforti, whilst the third and fourth classified were Petrucci and Sandi.

In the 125Gp Alessandro Tonucci (Aprilia – Junior GP Racing Dream) was the author of the fastest time and was at the head of the timesheets in both sessions with the time of 1’47”671. Fellow Pontone was second chased by Championship leader Miroslav Popov (the Czech rider challenging on board the Aprilia machinery of the Ellegi Racing Team) and 14-year-old Niccolò Antonelli on board his Aprilia of the Gabrielli Racing Team.

Domenico Colucci was the fastest rider among those taking part in the Stock 1000 challenge: the rider from Matera took the time of 1’38”845 on board his Ducati of the Barni Racing Team and had a better performance than Goi, Magnoni and Alfonsi.

GRILLINI AND THE MOTO2 – On Saturday morning at 10:30am, at the Bardahl hospitality, Team Grillini will present to press and workers the first rider enrolled in the Moto2, Nicolas Stizza, who is ready to ride for the team headed by Andrea Grillini in the category, which will debut at the Italian Championship.

WHAT A SATURDAY – As usual, on Saturday there will be many appointments: the autograph session with the riders from 6:00pm, many gadgets for the audience and the pole positions prize giving. The concert by Comunikando will take place at 9:00pm with the performances of Al Sonora, Gruppo Mat and the comic actor Max Pieriboni. The conclusion will be featured by a DJ set.

PIT WALK – On Sunday, from 1:00pm, the crowd will have the opportunity of walking along the pit lane, getting to know riders as well has taking pictures with them.

THE OTHER ACTIVITIES – Due Ruote/Motonline will prize the author of the fastest lap in the Stock 600 and there will be also the personalized stand in the paddock where free copies of Due Ruote and XOffroad will be distributed.

The CIV t-shirts, caps and colorful bracelets will be sold in the paddock: the profits will be devolved to the Cystic Fibrosis Research Foundation, charity partner of the 2010 CIV. Even the table football players from the International Champion Cup will be the protagonists of the weekend, appointment which registered a lot of success at the previous rounds. Info and schedule at www.ficb.it.

The Superbike, 125 Gp and Supersport challenges will be live broadcasted on Sunday from 1:50pm on. The races of the two Stock categories, 600 and 1000 will be broadcasted from 4:35pm on Nuvolari (channel 218 Sky and DT).

ONLINE – The official web site of the Championship, www.civ.tv, will offer a complete view of the event through the races highlights, the interviews of the protagonists and the Live Timing.

TIMETABLES, TICKETS AND PRICES – Tomorrow at 9:00am the qualifying will take place, whilst all the races will be disputed on Sunday starting from 2:00pm. The ticket to enter at Sunday’s races will cost 20 euros (reduced ticket to 15 euros for women, people under 18 and FMI card holders, free entrance for children under 14).).