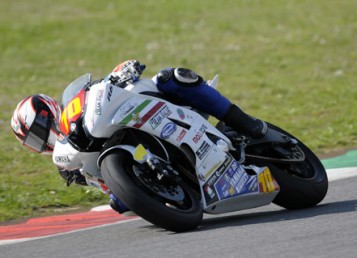 Fourteen of thirty-nine. These are the figures of the Italian Superstock 600 European’s starting grid on Saturday will take place at Imola the first round of the 2012 season and the Blues are ready to run a race to the tops

Among the members are the two stable rider of Team Italia FMI, Riccardo Russo and Luca Vitali. Encouraged by the greatest achievement a week ago at Mugello, on the occasion of the opening round of the CIV (victory for the first, second place for the Romagn rider), the young riders headed to the box by Cristiano Migliorati will try to keep up the Italian flag also internationally. “The performance in the CIV Stock600 filled our office – says Cristiano Migliorati (technical coordinator of the FMI) – our riders keen to get on track and demonstrate their value in the window of the World Superbike Championship. For imola we wish to highlight “.
Same goal for Francesco Coco. The Lazio rider, on the track with Yamaha Team Pata by Martini, will try to rescue the unfortunate test tricolor race in Tuscany, which had seen him among the leaders until a few laps from the end.
A benefit is also expected among the first by Christian Gamarino: the Ligurian of Team Go Eleven is in his second season in a permanent position in the European and after seeing the good things done in the year 2011 will try to keep the trail of the best.
At the top will try to get even Riccardo Cecchini, riding a 675 Triumph of the two members of the championship (prepared by FTR).
Among the wild-card, keep an eye on the Campania rider Nicholas J. Morrentino (Yamaha – Elle Promotion 2) that the protagonist enters the CIV 2011 of law among the favorites for a place in the top ten while the Romagna rider Franco Morbidelli (Yamaha – RCGM Team) aims to do much better than the round flag. As he also Stefano Casalotti (Yamaha – Team Coast) in search of the points.
Among the appearances “One Event” accepted by the organizer, Luca Salvatori (Yamaha – Team Pata by Martini), Emanuele Viglieno (second in the R6 Cup in Mugello and Imola with Yamaha Bike Service – WTR TEN 10), the Gas Racing Team with Filippo and Francesco Benini, Roberto Cavalli, but also Mercandelli (RCGM Team) and Gennaro Antonio Romano (FP Evolution).