Double round for all riders at the fourth round 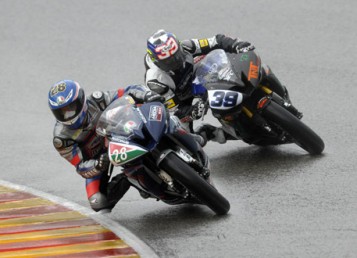 After the thrilling first racing day experienced on Saturday, the Mugello circuit replicated on Saturday as it was the stage of the 2010 Campionato Italiano Velocità fourth round. At the end of the five scheduled challenges, the winners were the five protagonists of the third previous round. All the winners were feeling confident on the demanding Tuscan circuit.

SUPERBIKE: DOUBLE WIN FOR CONFORTI  – The crucial moment of the Superbike race, which went on in rainy conditions, was the seventh lap when Luca Conforti (n. 24)  overcame Alessandro Polita (n. 53). The latter was at the lead until that moment. The Barni Racing Team rider had free way so that he could pull away to take the second victory in two racing days, courtesy of two magisterial performances. “I was worried at the start because I didn’t want to vanish Saturday’s great result – said Conforti who defeated Polita and Giovanni Baggi (n. 111) at the finish line – I want to congratulate my fellows, I learned a lot from them riding in rainy conditions”.

125 GP: POPOV STARRED AGAIN- Sunday’s 125 GP race as well was ruled by Miroslav Popov. The 15-year-old Czech rider of the Ellegi Racing Team (Aprilia n. 95) immediately pulled away at the start on the Mugello circuit, establishing a great advantage and managing it until the chequered flag, as an expert rider can do. Popov classified in front of Armando Pontone (Aprilia n. 80) and Francesco Mauriello (Aprilia n. 43). “This week was perfect because I ran two wonderful races, getting the best result – said the double race winner – my feeling was good, the bike set up was perfect and I hope to continue in this way until the end of the season”.

SS: LAMBORGHINI KEEPS STARRING – Heavy rain was the real protagonist of the Supersport race, valid as the fourth round of the 2010 Campionato Italiano Velocità. Two riders put in a show on the Mugello wet track: we are talking about promising Ferruccio Lamborghini and veteran Alessandro Gramigni. At the end of the 10-laps race the 19-year-old Lamborghini (Yamaha n.28 – Media Action Team by Prorace) prevailed on Tuscan “Gram” (Yamaha n. 39) and Ivan Clementi (Honda n. 18). “It was tough from a psychological point of view because during the warm up I realized how the track conditions were and I was a little bit worried – revealed Lamborghini – then, when I found my rhythm I made the difference”.

STOCK 600: MASSEI’S FOURTH VICTORY! – Massei, Zanetti and after them only empty space. This is the summary of the thrilling Stock 600 race. Fabio Massei (Yamaha n. 34 – Piellemoto Team) and Lorenzo Zanetti (Yamaha n. 8 – TNT Racing) battled it out for the victory of the third round, disputed on wet track, until the last meter. The battle among the two fellows was amazing, as they exchanged many times the lead of the pack. At the final lap Massei made it through a two cent of a second advantage by pushing hard in the Mugello straight away and taking the fourth victory from four disputed races. “We did a great race, it was hardfought and solid. We enjoyed it – said Fabio – in the final lap I was waiting for the final corner, staying behind my rival, to push hard and win”. Dino Lombardi was third onboard his Yamaha  (n. 13).

STOCK 1000: EASYGOING VERDINI – Following Saturday’s victory, Luca Verdini also conquered the fourth round of the 2010 CIV. The 25-year-old rider chased away at the start and immediately opened a gap over rivals, leaving them the battle for the second and third spots. The race of the Emmebi Team fellow was fantastic: he took the chequered flag on board his Honda (n.23) in front of surprising Rocco Andriotta (Suzuki n. 11) and Domenico Colucci (Ducati n. 89). “Grasping the double victory was fantastic, now our position in the Championship is better – said the winner – I did a solid start, setting my rhythm and obtaining a good advantage. The bike? It was perfect, I want to thank the team and Adopt a Rider”.

CALENZANO EXULTS WITH GRAMIGNI – Among the home riders results, Alex Gramigni’s performance was amazing. The 42-year-old rider born in Calenzano, former 125cc World Championship, debuted in the Supersport this weekend on board the TNT Racing Team Yamaha, ending very close to the victory. “Gram” will celebrate his return on the Italian podium joined by the whole Calenzano. “The race was good – said Alex – during the warm up I got I had a good feeling on the bike, even if I never tested it in dry conditions before today. My performance wasn’t as good as Lamborghini’s one in the straight away so I couldn’t keep his pace”.

Home rider Gabriele Martinelli, at the start in the same cathegory, retired. In the Stock 600 Federico Monti ended in eight whilst Nico Morelli crashed when fighting for the top five. In the Stock 1000, Lorenzo Alfonsi retired as well as his fellows.

NEXT APPOINTMENT – The 2010 CIV fifth round is scheduled on July 4th at Misano Adriatico, at the same time of the “Notte Rosa” weekend. There will be many collateral events, which will be announced in the next days on the Championship official web site, www.civ.tv . 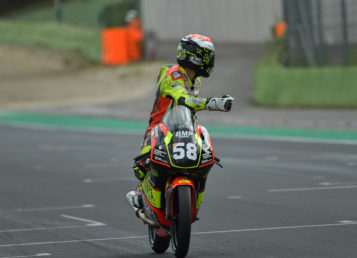 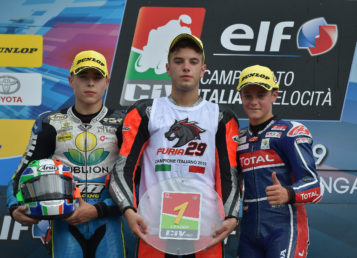