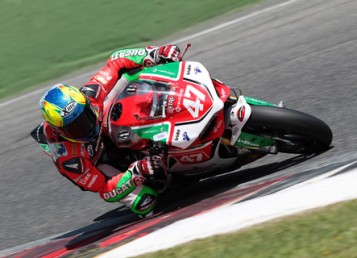 Campagnano (Rome), May 25th 2013 – This afternoon the circuit “Piero Taruffi” of Vallelunga hosted the races of the 3rd round of the CIV 2013. Tomorrow, on the same track, the fourth round is scheduled.

SUPERBIKE: LA MARRA, WHAT A RACE! – Starting from pole position, Lazio rider Eddi La Marra (Ducati – Barni Racing Team) won the race after dominating it from the first curve and which was stopped by red flag on last lap because of heavy rain. At the end of second lap La Marra had already gained a five-second lead on the second, rider from Marche Michele Magnoni (BMW – GM Racing by Tutapista), who ended up in second position with 6 “159 of delay. Third place for Ivan Goi (Barni Racing Team Ducati, 13 “380), with a nice passing in the final on the ranking-leader Leandro Mercado (Kawasaki – Team Pedercini). Fifth position for Vizziello, who won a battle against four riders: Conforti, Massei, Andreozzi and Lai, who ended up in this order.

MOTO3: FIRST VICTORY FOR VALTULINI – Stefano Valtulini (Honda) seized the top spot on the home track of his team, Five Racing AX52, and now is the championship leader. The Lombard rider was faster than Marche rider Luca Marini (Twelve Racing) who ended up second with a delay of 0″649 in a race which was interrupted five laps in advance due to a crash. The two riders run a similar race, and took immediately a good advantage on Manzi (fifth at the end). In third place Michael Ruben Rinaldi (Mahindra), who closed with 4″496 of delay but was good at coming back strong from the rear of the starting grid. Behind him Andrea Caravella (Honda – Team Minimoto), Manzi and Locatelli, the winner of Mugello.

STOCK 600: TUCCI WON A FIVE-RIDER BATTLE – It was the most uncertain race of the day. In the end Luca Salvadori (Yamaha) finished first thanks to a perfect performance but he was disqualified because of irregular gasoline. So the winner is Andrea Tucci (Honda), good at running to the top and keep behind rider from Campania Gennaro Sabatino (Yamaha, at 0 “232). Third step of the podium for Nicholas J. Morrentino (Mottini Corse Yamaha). Mattia Cassani (Yamaha – Team Rayo PA.SA.MA.) finished fourth, always struggling for victory until the last meter. Luigi Brignoli (Yamaha, Byrt by Extreme Racing) ended up in the the top five.

SUPERSPORT: FANTASTIC FOUR, CRUCIANI WINS – The finest challenge was perhaps in Supersport: four riders were struggling for victory until the last meter, but at the finish line Stefano Cruciani was the winner. On the day of his birthday, the rider from Marche who races with Kawasaki of Team Puccetti closed all the “doors” on the last lap to his rival of always, Ilario Dionisi. Lazio rider of Honda Scuderia Improve ended up in the place of honor, even if with only 0″119 of delay. This is the second win for Cruciani in three rounds. Third place for excellent Marco Faccani (Honda, at 0 “521), who formed the leading group with the two rivals for the 2012 title and Giuliano Gregorini (Team Yamaha Rosso e Nero, fourth with 0″621 delay). Fifth position for Giansanti (Kawasaki Puccetti).

TOMORROW IN THE HALL OF FAME: ROMAN RIDER ALBERTO IEVA –  Tomorrow, on CIV starting grid, it is scheduled the delivery to Alberto Ieva of celebratory picture and plate which attests his entry into the CIV Hall of Fame. Ieva is a roman rider and he was twice Italian champion in the “little” 50 cc class in 1971 and 1972, respectively riding Morbidelli and Malanca.

LIVE IN TV AND ON THE INTERNET – The fourth round in Vallelunga will be live tomorrow on AutomotoTV (channel 139 on Sky, visible to all subscribers), with commentary by Andrea Minerva. The other opportunity to follow the CIV runs on the web: live streaming, simultaneously, on the official website Civ.tv and Sportube.tv

THE COMPLETE PROGRAM – Tomorrow, the challenges of the second round will preceded in the morning by the National Trophy races and the Honda Hornet Cup, Honda CBR 600F and RR Cup. At 14:30 the Superbike race will start, followed by Moto3, Stock 600 and Supersport, the latter at the start at 17:10.

The general admission ticket to lawn and terrace box will cost 15 euro (10 reduced for under 18, women and FMI, free for under 14 accompanied).