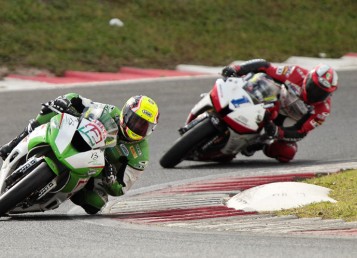 SUPERBIKE: NONE STOPS LA MARRA – Also today there was no story: an amazing result by Eddi La Marra, who dominated the fouarth round on the Ducati of Barni Racing Team. The young rider from Lazio started well from the pole, and maintaned a an unsustainable pace for all the others. With his victory, he takes the lead of the championship with six points ahead on Mercado. This time the main struggle was with Michele Magnoni. The rider from Marche, riding the BMW of Team GM Racing by Tutapista, tried to go to the lead until mid-race (at a certain moment he has only one second and a half of delay from the leader), but in the second half of the race he stopped attempting, and he ended up at 5 “865 from the winner. Third position for Ivan Goi, who was not successful against his teammate in Barni Racing Team (his final delay from La Marra was 14″967). With this double podium Goi gains important positions in the overall standings. In the top five also Leandro Mercado (Kawasaki Pedercini, 16 “996), who was not able to repeat his winning weekend at Mugello, and a good Gianluca Vizziello (BMW Racing Moto X), who ended up at 25” 879.

MOTO3: SURPRISE FOR MANZI BUT … WHAT A RACE! – Crazy race, that of Moto3. Four riders played for the victory until the last centimeter: Stefano Manzi (in the photo) and Luca Marini, both riding for Twelve Racing Team, Miroslav Popov, Team Oral Cruciani, and Stefano Valtulini (Honda – Fiveracing AX52) made a great show up to the last round which decided the ranking of this fourth round. After a contact between Popov and Valtulini (which cost valuable meters to the Italian, who is the winner of yesterday round) and the subsequent crash of the Czech, in the fight for first place were the two team mates Marini and Manzi: the winner, for only 0 “051, was the rider from Romagna Manzi, good at scoring his first win in the CIV. For the third time this season Luca Marini closed in second position, but he was the most “active” of the group, content with the runner-up in both the race and championship (he’s now only six points away from Valtulini). Third position, at 2 “071, for Lombard Valtulini, who after the victory of yesterday is still on the podium and celebrates his leadership in the tricolored ranking. Behind him, Michael Ruben Rinaldi (Mahindra Racing, 4 “579), who ended up ahead Enea Bastianini (Elle 2 Ciatti).

STOCK 600: IN THE STRUGGLE AMONG NINE RIDERS, SABATINO WINS! – The race was held on 9 laps for a red flag exposed after the fall of Oppedisano. Fixed the track, the protagonists of Stock 600 gave life to the best show of the weekend. Nine of them, in fact, struggled for victory, proving once again the quality of this tricolored class with contacts and overtaking, but always within the bounds of correctness. At the end, the large Roman audience celebrated Gennaro Sabatino’s victor: he was very good at taking the lead in the decisive lap and at defending his position, scoring his first triumph in 2013. Second place for Andrea Tucci (Honda) who after yesterday’s victory missed the second win for only 0 “060. In third place Nicola J. Morrentino (Yamaha Racing Mottini, at 0 “171), who in the first fraction showed to have something more than the others, gaining about 50 meter margin over opponents, which was however canceled by exposure of the red flag. Behind the trio, Federico Monti (Yamaha Bike Center, at 0 “382), Luca Salvadori (Yamaha, at 0” 737), then Caloroso, Vitali, Benini and Oppedisano, all good for riding in the front group and fighting for the podium, to end up very close to the first ones.

SUPERSPORT: SECOND VICTORY FOR CRUCIANI – Two victories in the “home” of his rival Dionisi project him alone atop the standings. Stefano Cruciani wins the fourth round, scoring two victories in Vallelunga and sending a signal to Lazio rider. The rider from Marche, riding with Team Kawasaki Puccetti, started a “forcing” after the first half of the race and none of the opponents managed to resist. Good second, for Marco Faccani from Ravenna (Honda, 1 “616), who after the third place of yesterday still improves his best positioning of the season, proving to be one of the absolute protagonists of the season. Third place for Cruciani’s teammate, Mirko Giansanti. The Umbrian rider ended up at 3 “856 from the winner, scoring his first podium of the season and leaving Vallelunga in high spirits as for the next races. Ilario Dionisi (Honda, Scuderia Improve) failed to go beyond the fourth place: the reigning champion had a hard job in passing Giuliano Gregorini (fifth with Yamaha Team Red and Black) but he ended up with a delay of 5 “920 from Cruciani, closing a difficult weekend far from the podium.