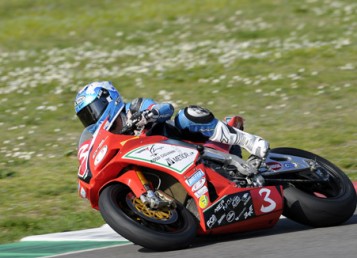 He had already shown evidence of having an edge over their opponents and today, the first challenge Stock 1000 tricolor, Alessio Corradi managed to close a wonderful weekend with the icing on the cake, coming back to win after so long. Strong shot from the pole position the rider from Langhirano (Aprilia – Team New M2) took off immediately with a series of fast laps that allowed him to pull their opponents. “It seems to me to be back in the old days and I’m really happy with this result – said an excited – I thank the team for a great job and I dedicate this victory to my family.” The only to hold his head, thanks to a very good recovery has been the Umbrian Alessio Velini (BMW – 2R Antonellini by Bargy) that after a starting so-so has remade under the Parma rider in the final stages, but without bridging those five tenths gap that would have allowed to fight until the last meter with Corradi. “At the start did not go well but then I got back – has revealed “Poison”- when I went over to Alessio his tires began to deteriorate and I could not launch the attack. Congratulations to him, was good. ” A benefit for Velini still positive, which is placed behind a positive Ivan Goi: the rider from Mantova, former champion of the Italian Stock 1000, took the podium debut the 1199 Ducati Panigale already proving to have a good feeling with the bike prepared by the Team Barni. “We worked so hard this weekend but we found just the right way in the warm-up – said Ivan – I run the tires at the beginning and then reassembled strong, hitting the podium important.” Off the podium by a hair from the rider from Marche Simone Saltarelli: Stock 1000 by SBK passed to the pilot Barni has closed nine tenths off his teammate, followed by Fabrizio Perotti in trouble in the past rounds of the BMW Racing Team Play.