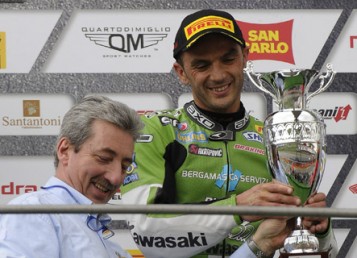 A victory and a strong signal to his ancient rival Ilario Dionisi: Stefano Cruciani signed a perfect weekend at Mugello, winning race2 after controlling it from start to finish. The rider of Racing Team Puccetti Kawasaki blasted from the grid together with his team-mate Riccardo Russo (wild-card), and he immediately built a good gap. Nothing to do for Ilario Dionisi (Honda – Scuderia Improve), who did not start well and was soon forced to give up his attempt to recover ground on the two fastest opponents: afet a few laps they were already more than two and a half seconds ahead. In the end, the rider from Lazio was satisfied with the third place, even if with ten seconds of delay, because he mantains the leadership of the standings.
In the lead, Russo and Cruciani were fighting until the last lap. The rider from Campania raced almost the whole race in Stefano’s contrail and in the end he went ahead twice. But in the decisive round, Cruciani passed back in the lead thanks to a perfect lap and was able to build a small gap between him and his rival. A tenth of advantage was enough to sign his first victory of 2013.
“It was a great satisfaction for me to win again – Cruciani said – after the podium yesterday I could only improve my result and so I did. Now I’m enjoying this moment and then, from Vallelunga on, I’ll start again thinking about the championship. It will be tough … “
Russo can be pleased with his performance: two second places for him at Mugello and very useful information collected for the race world of Aragon next week. A good debut in Supersport for the Kawasaki rider of Puccetti Racing Team, who is supported by Italian Motorcyclism Federation.
Behind Dionisi, fouth place for Giuliano Gregorini, who in the final straight was clever in keeping himself in front of Marco Faccani and Mirco Giansanti.