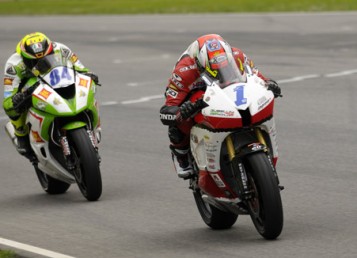 Great comeback and first victory of the season for the Italian Supersport champion, Ilario Dionisi. The rider from Lazio run a perfect race on the reliable Honda by Scuderia Improve Team. After a great start, he left the wild card Riccardo Russo go ahead: in the early rounds he played the role of the fox on Puccetti Racing Team Kawasaki, and then Dionisi’s unbelievable pace did the rest.

After gaining ground on the rest of the company, that is on Cruciani, Giansanti, Tamburini and Cottini, Dionisi went to take rider from Campania and, after passing him with a clean, efficient overtaking, he gained the leadership in the final laps, and below the checkered flag he closed the race ahead for nearly one second. “Despite some problems in qualifying, thanks to thegood job of the team we’ve been able to bring home this great result”, Ilario said. “Congratulations to Riccardo, I expected he was strong, but not already in the first race of the season.”
Russo tried to keep Dionisi’s pace, but at the end he had to settle for a second place, also because of the decline of the tires. For the rider from Campania it was a very good debut in the Supersport class, indeed, and the performance is even more appreciable considering that it arrives just one week before the world stage in Aragon, where he will take part to his first race in World Supersport.
A bit of disappointment for Stefano Cruciani (Kawasaki – Puccetti Racing), who was slowed down by crash in practice session, which did not allow him to go beyond the third.