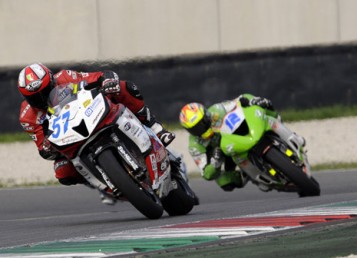 He started as he finished in 2011: in command. Ilario Dionisi has also made his first opening race of the season CIV Supersport, winning solo riding the Honda Scuderia Improve perfect after fourteen laps. Tripped stronger pole position, the 28-year old from Lazio held immediately an unsustainable rate for opponents, running the race with relative ease as he himself said just come down from the podium. “We knew we had a nice pace, and so after taking a good margin I administered the advantage, not force – said Hilary – the team did a great job and are charged for Imola. The victory? I dedicate it to my daughter Emma. “
Behind the defending champion, who is a candidate to be the favorite for the 2012 season, he finished the great Stefano Cruciani. The rider from Marche, which was presented at Mugello again riding the Kawasaki Team Puccetti, has accused a problem keeping the tires that did not allow him to remain in the wake of Dionisi, but did well to get behind another big star last season, the rider from Romagna, Roberto Tamburini (Honda). Bella the challenge between the two, which eventually awarded Cruciani just four hundredths of a second but has already revealed what could be the two main rivals for the title of champion. “I finished chewing the halfway stage in an attempt to catch up on Dionisi but for now I’m so happy.” These words Cruciani, while Tamburini is on finding the best feeling with the Honda. “After four years of Yamaha I have yet to take the measure of this bike but I am very happy with this podium. Now I have to work hard to improve myself … “.
Beautiful the fight for fourth place, which saw the Umbrian do battle Mirko Giansanti, the Tuscan Alessandro Gramigni and Russian Vladimir Leonov: the end got the better of Team Kawasaki rider Puccetti, followed in the wake of ex- World Champion (wild-card at Mugello) and the bearer Yakhnich MS.
Cottini, Palumbo, and Faccani Tarozzi have closed the top ten in the order of the day.