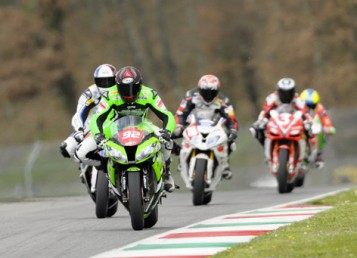 A group of seven riders went to the lead gaining ground on their opponents since the first laps, but only four of them remained in the fight for the victory in the last lap. Corradi, La Marra, Gimbert, Mercado, Bergman, Magnoni and Lai were the major players in the second round of the CIV, putting on a show for 14 laps in “Superbike style” but in the end, on the finishing line, the fight was between two riders: Corradi and Mercado. The strong Argentine rider on the Kawasaki of Team Pedercini won again for 5 hundredths of a second, taking full advantage of the Italian’s trail and passing him just below the checkered flag, to sign the first “double victory” of the weekend after yesterday’s. “I knew I had a good pace and I managed to stay in the leading group – Mercado said – I tried to get away but when I realized the that others would not let me go I kept advantage from trail on the last straight. I am very happy and I hope to continue like this”.

Corradi, on Aprilia of Nuova M2 Team, was not so fast at the start, but he managed to sign a great recovery and a great overtaking in braking at San Donato curve (he passed four riders all together, making his bike slide as a supermotard) and he tried to take some advantage in the final corner. He missed the victory, but with two second places the Emilian rider showed he can be a protagonist of this season.
Third place for Eddi La Marra: the rider from Lazio, who races on the Ducati of Barni Racing Team, was one of the fastest in the leading group and closed at four tenths from the first two positions, catching the third place in the second weekend and showing that he feels already comfortable in the new category. Fourth place for Michele Magnoni (BMW), who was overtaken by La Marra on the last straight. Problems with tires in the end for Sebastien Gimbert (BMW) who finished in fifth position.