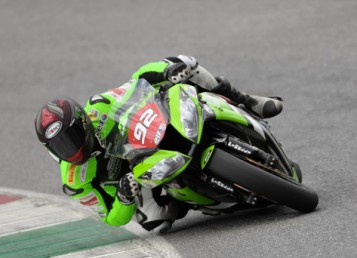 Leandro Mercado is the winner of the first round of 2013 Superbike CIV. The Argentine rider, on Team Pedercini Kawasaki, showed from the beginning that he was stronger than his opponents. He made a very good start and immediately built a small gap. Four riders behind started a great forcing: Sebastien Gimbert (BMW – Thevent Racing Team), Michele Magnoni (BMW – GM Racing by Play Racing), La Marra (Ducati – Barni Racing Team) and Corradi (Aprilia – New M2).
These five riders formed a formidable group and they characterized the opening race of the season with continuous overtakings, contacts and limit-breakings. Five riders on four different bikes played the best spirit of the new Superbike tricolored championship. At the end young Mercado was the winner: thanks to a perfect guide in the final meters he managed to keep some meters between himself and his opponents, and passed the checkered flag with over three-tenths of advantage. “I tried to go away, but they caught me up”, Mercado said. “Luckly I managed to keet the lead and win. I’m very happy and want to thank my team”
Behind him, a particularly strong Alessio Corradi, who sealed a fast recovery and booked a place as a protagonist of 2013. First podium of the season for Eddi La Marra: in the final laps he could not reject Emilian Corradi’s attack but he managed to end up third. Gimbert and Magnoni were authors of a good proof and closed the race in this order.