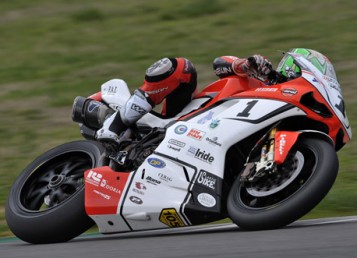 It looked like a race without a history, intended to close with Matteo Baiocco quietly under the checkered flag victory in the preludes. But Gianluca Nannelli has made uncertain due to a fantastic final lap until the last meter. Past on the straight for the final round with two seconds to recover, the Tuscan with Team Grandi Corse has over the last few meters with the “knife between his teeth,” showing up at the final corner behind the defending champion. Eventually he checked himself Baiocco, bishop Ducati Barni, author of the first victory of 2012 to palpitations. Bravo, Matteo, has the potential to better exploit its license plate Barni and 1198 and confirmed in its class. “I knew that Nanna would come in the finale, because it signaled me from the pits – Baiox reveals – he’s a great rider and also the home track is very strong. I tried to defend myself better and I was able to dull but the league will not be easy. “

Nannelli, for its part, has sent a signal to Baiocco, which can not relax even for a second year. “I looked for the victory until the end and I failed by a whisker – Nannelli said – several times I almost start to finish in the ground and when I calmed down I started to push hard but maybe it was too late. We were not 100%, we missed a practice session and to win here you need to be okay but it was a good performance.That’s fine and I thank the team. “
In third place was closed Fabrizio Lai. The rider from Milano, bishop Althea Racing Ducati by Echos was released in a hurry to Luca Conforti still struggling with the feeling with the Pirelli (the Lombard of Team Barni close fourth under the checkered flag) but failed to keep pace with first two also because of an arm rather painful. “At first I was a big step and I was not far from two of the head but then I started to slow down because of arm pain. Now I hope to get back into shape ahead of the second round because we have the means to do even better. “
Finished fifth in solitary Lorenzo Mauri (Ducati – M. Motocorsa), before David Caselli good to get behind Giovanni Baggi, then the order Enrico Pasini, Luca Pedersoli and Francesco Ciacci.