CIV Mugello, Moto3: what a lot of young people 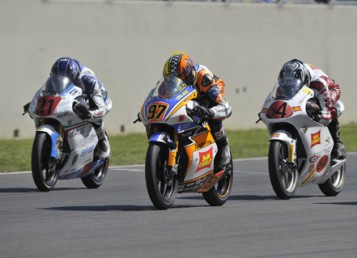 A lot of possible protagonists in Moto3. From this year, four-strokes will have “free field” (from the same grid also the Trofeo Honda NSF 250 will start but with separate rankings) and there are many riders who can play the role of favorites of the day before: among them, there will be Andrea Locatelli (Mahindra Racing) the rider from Bergamo who did so well at the beginning of last season and this year he seems to have all it takes to race for the title.

Against him there will be his teammate, Ruben Michael Rinaldi, from Romagna, who was one of the first actors of 2012 and who is ready to rise to national prominence pointing to winning the championship with Mahindra. Same thing for the Czech Miroslav Popov (Oral – Cruciani RT), Cristiano Carpi (KTM), Agostino and Stefano Santoro Valtulini (Honda for both), often behind the podium last year, but sometimes even in the top three and ready today to steal the opponents.
There will also be the young Roman Simone Mazzola (FTR – Publisport CBC), who is experiencing his second season in the CIV but will debut in Moto3. Also the Capitoline Fabio Di Giannantonio (Ioda), winner of PreGP in 2012, is at his first season in the Italian Championship.

All eyes on other protagonists of the last edition of the Italian Cup, too, that is Stefano Manzi (FTR – Twelve Racing), Niccodemo Matturro and Lorenzo Petrarca (both Honda – Delta Racing), three young riders that, we bet, from Mugello on will have no particular emotions or reverential fear debutting in most national championship.