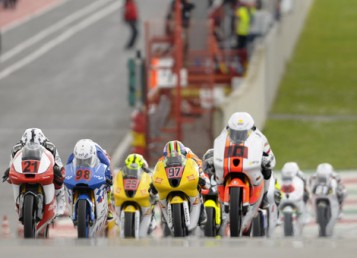 The “terrible kids” of Moto3 are strong and all of them want to win. The demonstration was today in the second round of CIV: after the first half of the race, there was a large group of eleven riders at the lead and they all were protagonists of limit-passes and brakings in minibike-style.

Thanks to a nice forcing in the end, the winner was the British Ryan Wayne (KRP), who with a perfect trajectory at the “Bucine” corner was able to take a slight advantage and keep the lead until the chequered flag. A beautiful demonstration of strength for the 15 year old English rider, wild card here at Mugello. “I made a good start and it was not easy to stay ahead of a large group – the winner said – They were all strong, but in the end I managed to make the difference. I go home happy and I thank the team for this”.
Great performance also for the “landlord” Tuscan Michael Coletti. He started well from a middle position in the grid and once he got in the leading group he did his best to win. At the end the rider of Honda Minimoto Team was the last one to surrender to Wayne, and he missed the victory by just eight hundredths of a second, but proved to have all cards in order to be a leader during the season.
After yesterday’s victory Andrea Locatelli confirmed himself going back on the podium: a good result also because he continues to lead the overall standings. The rider of Mahindra Racing missed the victory for a tenth of a second, but was good at keeping in front of fast Simone Mazzola (Honda) fourth at the end. The Roman rider was the protagonist of a good recovery and didn’t catch the podium only for two-tenths of a second. In the top five Enea Bastianini on Honda.