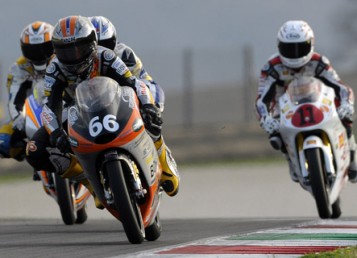 The first historical challenge of Moto3 tricolor was won by the Romagna rider Matteo Ferrari. San Carlo Honda Pilot Junior, the 14 year old Rimini was good to have the best good setup found during the tests and above all to make a difference in the final stage of the race. In battle with the other two stars of the Mugello, Kevin Calia and Andrea Locatelli, Ferrari has succeeded in the final laps to rid the company of two opponents and then pass under the checkered flag with seven tenths of a second ahead. A nice demonstration of force to Matteo, which will be found certainly among the top riders in the coming times also. “I really enjoyed myself – said the winner – I thought they could not do it because the whole race I have been in the past and instead wake them back detached and I won the first race.Thanks to the technicians, I had a perfect bike “.
In second place, thanks to an excellent starting point on the final straight and finished in Calia, the protagonist of the session. Bearers of the Honda Team 2 Elle Ciatti, was left with the underdogs but eventually finished second with a few complaints about the tires. “I had trouble keeping and in the end I could not stand in the wake of Ferrari. Luckily I grabbed second place to the next but I hope to return to the top step. ” Behind him, the Lombard Locatelli who after winning the Trophy Moriwaki proves to be racing at its best even in the CIV. “Beautiful the first race in Italian. Over the last few meters I thought I had his grip on second place and instead Calia passed me right under the checkered flag but that’s OK, I ran a race at the top “.
He finished fourth Stefano Valtulini (Honda – Imperial Racing) who ruled in the final German Luke Grunwald (Honda). Among the top ten are over Michael Coletti, Maximilien Kappler, Federico Fuligni, Alessio Cappella and Agostino Santoro. To note the double departure from the scene of two bishops of the Federal Team Gabrielli, Manuel Pagliani Ruben and Michael Rinaldi of Oral, out of the race while they were in the best of the bunch.