CIV Mugello: made the starting grid 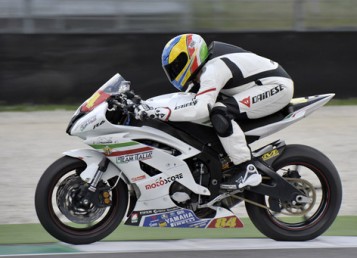 In Stock 600 the star performer of the day was Team Italia FMI, with its two bearers Richard Russo and Luca Vitali. The first, from Campania, clocked the best time with 1’56 “193 while his team mate from Romagna is behind the three-hundredths of a second.

The first row of the grid, which this year for all classes will consist of three riders per row, is closed by Yuri Menchetti (Yamaha) in Barberino del Mugello. With around a textbook, however, the Emilian Alessio Corradi (ex-World Superbike and Supersport rider) has set the fastest time of the 1000 Stock. The bishop of M2 Team New Aprilia took his time of 1’53 “408, by four-tenths better than its limit yesterday. Behind him in the Umbrian Alessio Velini four tenths (BMW – 2R Antonellini by Bargy) and the Lombard Fabrizio Perotti (BMW – Play Racing).

Another Lombard rider, Fabrizio Lai, has the pole of the Superbike. In the Ducati Althea Racing by Echo, the bishop of Milan showed a good 1’51 “619 which earned him the first time in front of defending champion Matteo Baiocco (Ducati – Team Barni) and the Florentine Gianluca Nannelli (Ducati – Team Grandi Corse), who had to cancel the morning shift for technical reasons but due to the great work of the team will find itself tomorrow in the front row.

Because of the rain fell from 16 on the Tuscan circuit, the times were unchanged in the other four categories. For them it is valid for the qualifying session yesterday in the 125 GP, the pole man will be the rider from Romagna Riccardo Moretti (2’01 “413 with the Indian Mahindra) to be triggered before the young Lorenzo Dalla Porta (Aprilia – OR by Corse-2B Zack M.) and KTM led by German Max Enderlein. The historic first pole position of the Moto3 has been hand  to Kevin Calia (Honda – Elle Ciatti 2) that with 2’04 “529 he secured the first place against Matteo Ferrari (Honda) and Manuel Pagliani (Oral – Team Gabrielli), however good in a hurry to climb the area of high rank.

Same goes for the Supersport, which will see from the “pole” the Italian champion Ilario Dionisi. The rider from Lazio, forces in the Scuderia Improve (Honda) ruled yesterday a 1’54 “980, two-tenths better than the 2011 time trial of his rival, Roberto Tamburini, who attended the race as a wild-card on a Honda. The third remained Stefano Cruciani Kawasaki Puccetti.

Moto2 to the pole was set by the rider from Bologna Ferruccio Lamborghini (Quarantaquattro Racing, 1’56 “028) followed by Marche rider Alessandro Andreozzi (Andreozzi RC) and the Danish Robbin Harms (Bimota by Edo Racing).